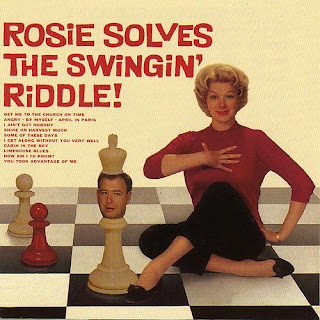 After a two-week-long silence due to my having led a group of students from the University of Tennessee at Martin on a study-abroad trip to Europe, The Vintage Bandstand returns with the first installment in the new Arranged by... series of articles. These posts will concentrate on albums on which legendary arrangers have left an indelible mark. And for the first one we are taking a closer look at one of Rosemary Clooney's masterpieces, recorded in 1960 for RCA-Victor and arranged by the great Nelson Riddle.

By the time he wrote these twelve charts for Rosemary Clooney in 1960, Nelson Riddle had made musical history throughout the 1950s with the epoch-making albums he arranged for Ella Fitzgerald, Nat King Cole, Judy Garland, and most of all, Frank Sinatra. He had also been working with Clooney for several years as the musical director of her television show, and the closeness and warmth of that association comes across on the album they cut together, which someone at RCA shamelessly decided to name Rosie Solves the Swingin' Riddle!, not even sparing the exclamation point at the end.

While the title may be a ridiculous attempt at wordplay, the album itself remains one of the best in the prolific careers of both Rosie and Nelson, a perfect blend of self-assured singing and sympathetic arranging. The emotional connection between the two is very evident: indeed, in the original liner notes, Riddle mentions that Clooney "happens to be one of my favorite people," and then goes on to say that "Rosemary Clooney is a wonderful vocalist. More than a singer, she's a musician. She does everything well. Her phrasing, taste, and ability to swing make arranging and conducting a real pleasure. As a consequence, this album has been one of my most enjoyable experiences." As Riddle biographer Peter J. Levinson states in his notes to the 2004 CD reissue, Clooney shared a similar view about her work with the arranger: he quotes Rosie as saying that her association with Nelson was "the best blending of my job and my personal life that I've ever had." And so it was, because Clooney's relationship with Riddle was not all work and no play—the two were involved in an affair that would ultimately lead to the collapse of both of their marriages, and one that Rosie would remember fondly several years later when she called Nelson the love of her life.

Leaving their personal lives aside, there is no doubt, upon listening to Rosie Solves the Swingin' Riddle!, that the romantic connection that vocalist and arranger shared translated naturally to the finished recorded product. The album was cut in May and June 1960, and Riddle's studio orchestra featured at the time some of the best West Coast musicians around, including trumpeters Cappy Lewis, Pete Candoli, Shorty Sherock, and Don Fagerquist, saxophonists Buddy Collette and Plas Johnson, guitarist Al Hendrickson, pianist Bill Miller (famous for his work with Sinatra), bassist Joe Comfort, and drummer Alvin Stoller, among others. Many of them were familiar with Clooney's singing from working in the orchestra used on her television show, which makes the interaction between singer and band even closer and more effective. As they worked together in the 1950s, Riddle and Sinatra had come naturally to the realization that the clear-cut division between swingers and ballads in the old swing band days needn't be that strict, because swingers could be slowed down and, similarly, ballads could be made to swing lightly. That idea became one of Riddle's trademarks and added to the appeal of his arrangements; such a principle is clearly at work on this album, and as usual, to great effect. 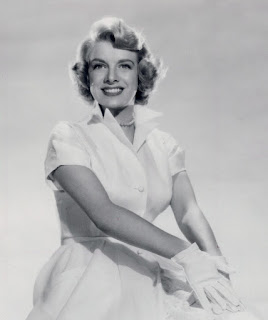 This is apparent in the album opener, Alan Jay Lerner and Frederick Loewe's "Get Me to the Church on Time," which is brassy but more understated than one would think. The next tune, "Angry," pretty much fits the same mold, while Hoagy Carmichael's reflective ballad, "I Get Along Without You Very Well," is taken at a much sprightlier tempo than other versions by, say, Sinatra or Chet Baker. In the hands of Clooney and Riddle, it is a ballad that swings easily but that does not lose any of its introspective quality. The two reach back in time quite a bit on some of the tracks: that is the case with the Gene Austin-associated "How Am I to Know" (with lyrics by Dorothy Parker), beautifully punctuated by saxophone solos from Plas Johnson. Other songs included in the album that often hark back to the old vaudeville days are "I Ain't Got Nobody," Shelton Brooks's "Some of These Days," "Shine on Harvest Moon," and the Ethel Waters classic "Cabin in the Sky," all of which demonstrate Clooney's appreciation of first-class pop and jazz-inflected songwriting. 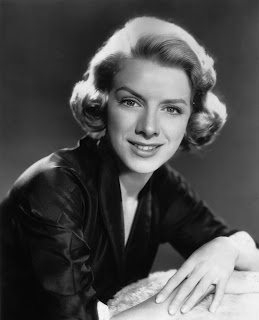 On Richard Rodgers and Lorenz Hart's "You Took Advantage of Me," Riddle's writing is clearly reminiscent of his work with Sinatra on Songs for Swinging Lovers and A Swingin' Affair, and Rosie's singing, underscored by George Roberts's clever work on trombone,  shows how important lyrics always were to her when it came to interpreting a song. The Latin-tinged arrangement of "April in Paris" is initially driven by Jack Costanzo on bongos, but toward the end of the chart, the orchestra takes over and supports Clooney's vocals in style. Annotator Levinson calls "By Myself," written by Howard Dietz and Arthur Schwartz and revived by Fred Astaire in the movie The Band Wagon, "the gem of this CD," and in the light of the seamless interaction between Clooney and the orchestra, it is hard to argue with him. But then the album is really a gem as a whole, and by the time we reach the last track, "Limehouse Blues," we are more than ready to overlook the occasional gimmicks that Riddle employs on this Asian-influenced melody, which actually works very well as a closer. It is to this record what, say, "It Happened in Monterey" was to Sinatra's Songs for Swinging Lovers. The CD reissue includes two bonus tracks, recorded almost a year later, in April 1961, and although "Without Love" and "The Wonderful Season of Love" (the theme from the then-current movie Return to Peyton Place) are more conventional ballads, they are worthy additions to the package and show what a good string writer Riddle was. Overall, Rosie Solves the Swingin' Riddle! can be considered the crown jewel of the personal and professional association between Rosemary Clooney and Nelson Riddle, a passionate romantic affair that, fortunately for us, also resulted in a most swinging musical affair.

Posted by Anton and Erin Garcia-Fernandez at 9:18 AM