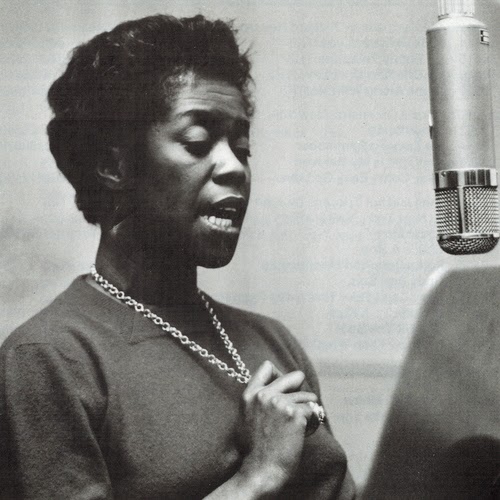 The weather has been unusually cold in northwest Tennessee as of late, and in the city of Martin, the snowfall we had a few days ago has caused campus to close and classes to be canceled at the university, to the great joy, I suppose, of the whole student body. The landscape all around our house is uncharacteristically white, and the cold temperatures have made me want to dust off my copy of one of Sarah Vaughan's most underrated concept albums: Snowbound, cut for Roulette Records in 1963 and boasting some beautiful lush, moody string arrangements by Don Costa. Of course, the winter season has occasionally been the subject of some noteworthy albums, such as Dean Martin's A Winter Romance, which also includes some Christmas songs as part of its wintry theme. And then there are Yuletide albums that also include tunes about the winter, such as June Christy's This Time of Year. But the concept behind Snowbound is slightly different. Here we have a record that uses a snowy day as a setting to bring together a group of well-chosen songs about love lost and found, about longing and reminiscing, and about joy and despair, all of them enveloped in a warm, dreamy atmosphere that invites us to sit by the fire and gaze at the snow-covered world outside. In short. the perfect soundtrack for days like these. 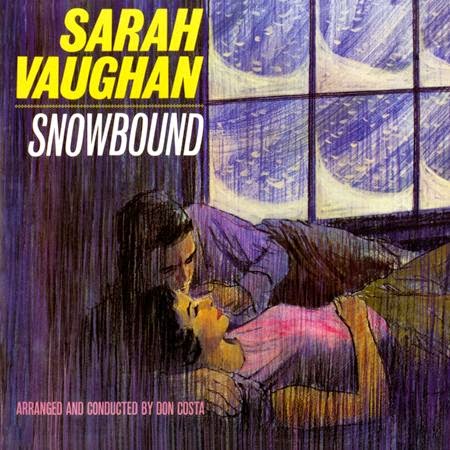 As Will Friedwald rightly observes in his Biographical Guide to the Great Jazz and Pop Singers, the thirteen albums that Sarah Vaughan released on Roulette between 1960 and 1963 (yes, that is really about three LPs a year!) must be counted among the high points in her career:

Her output [for Roulette] . . . was massive both in quality and quantity. . . . If almost any other singer had done thirteen albums of this caliber in her entire career, we would have to assess her as a major artist. . . . Yet with Vaughan, it's just a drop in the bucket in the context of her total catalogue. (492) 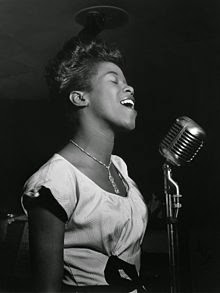 This was a period in her career when Vaughan was paying as much attention to her jazz albums as to her adult pop projects, and needless to say, Snowbound belongs to the latter group. The title track, which opens the LP, is one of the coziest, dreamiest tunes in the whole disc, and it sets the scene and the tone for the intermingling of songs that deal with all different facets of love, from the excitement of its discovery ("I Hadn't Anyone Till You," "Stella by Starlight," "Oh, You Crazy Moon") to the grief caused by its loss ("What's Good About Goodbye?", "Glad to Be Unhappy"). Vaughan and Costa also select one of George and Ira Gershwin's lesser-known compositions, "Blah, Blah, Blah," as well as one of Johnny Mercer's most evocative lyrics, "I Remember You," with its clever internal rhymes set to a haunting melody by Victor Schertzinger. The album, which also features two songs by Sammy Cahn usually associated with Frank Sinatra, "Look to Your Heart" and "I Fall in Love Too Easily," closes on a high note with Vaughan's pensive, soothing treatment of the ballad "Spring Can Really Hang You Up the Most," whose lyrics announce the coming of the spring while at the same time offering a word of warning about the dangers of a deceitful spring romance.

In spite of the undeniable quality of Vaughan's vocal performances and of Costa's tasteful arrangements, Snowbound is, as John Bush puts it in his review for the Allmusic website, "an overlooked gem from Sarah Vaughan's Roulette years." That is actually putting it mild, if we bear in mind that, other than on the essential—and rather expensive—eight-CD box set The Complete Sarah Vaughan Roulette Sessions (Mosaic Records), this album can only be found in CD format on an out-of-print British two-fer that couples it with 1964's The Lonely Hours. Owing to the sheer size of Vaughan's recorded output throughout her long career, it is perhaps not very surprising that this lovely album remains hard to find. Yet it is a notable void in her always impressive catalog that we wish some reissue company would see fit to fill—especially when snowy days like these come around!

Posted by Anton and Erin Garcia-Fernandez at 1:29 PM No comments:

All What Blues 2: Bull Moose Jackson 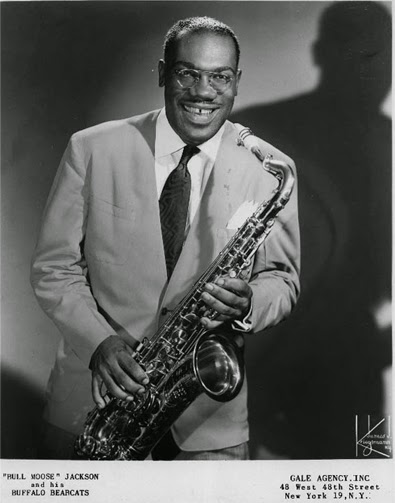 In this second installment of the All What Blues series, we delve into the fascinating career of Bull Moose Jackson, a man who embraced a myriad of styles, from blues to jazz to pop to country. He could sing a sweet ballad and follow it up with a risque blues, all the while blowing some very worthy saxophone. Here is, briefly, the story and the legacy of one of the most exciting jump bluesmen of all time.

In the All Music Guide to Blues, Bill Dahl writes that Bull Moose Jackson "had a split musical personality" (213), and if we listen to his records, we must agree that Jackson was, indeed, a Jekyll-and-Hyde sort of bluesman, the kind that Robert Louis Stevenson, had he ever heard of the blues, would have loved. On the one hand, when he was feeling like Dr. Jekyll, Jackson sang sweet love songs in a style that reminds us of Billy Eckstine, though his voice was not as deep and versatile as Mr. B.'s. But when he turned into Mr. Hyde, Jackson sang funny, mildly risque jump blues songs with titles such as "Big Ten-Inch Record," "I Want a Bowlegged Woman," "Nosey Joe," and "We Can Talk Some Trash." And there was yet another side to his musical output: because he spent a big chunk of his recording career at Syd Nathan's King Records, which was originally a country label, Jackson cut rhythm and blues versions of country and western tunes such as Wayne Raney's "Why Don't You Haul Off and Love Me" and Faron Young's "If You Ain't Lovin' You Ain't Livin'."

Of course, his given name was not Bull Moose but Benjamin Joseph Jackson, and he was born in Cleveland, Ohio, in 1919 into a musical family that encouraged his interest in music. It appears that as a kid he tried to learn the violin but he quickly became interested in the saxophone upon first hearing jazz, and throughout his career, both his singing and his playing would be featured on his records. In 1943 he joined the reed section of Lucky Millinder's popular orchestra, singing occasionally with the band. It was also around this time that he acquired the nickname of Bull Moose, allegedly from some fellow band members who thought he looked like that animal, and the moniker would stick with him for the rest of his life. Jackson was growing increasingly popular within the Millinder outfit, and so in 1946, apparently at the suggestion of Millinder himself, he struck out on his own, cutting his very first solo record, "Who Threw the Whiskey in the Well." This led to a long and fruitful association with King Records, a label that was dabbling in both the country and r&b markets and that, therefore, urged its blues artists to record country songs and vice versa. 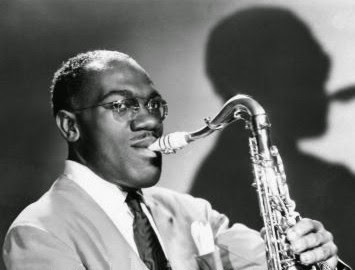 It is at King that Jackson's so-called split musical personality developed in full. Some of his Eckstine-like slow numbers, such as "I Love You, Yes I Do" and "All My Love Belongs to You," with arrangements that also spotlighted his sax playing, became hits. But the buying public also received Jackson's more risque outings rather well, in particular "I Want a Bowlegged Woman," Jerry Leiber and Mike Stoller's "Nosey Joe" ("he's ready to stick his long nose in their [women's] business"), and his classic "Big Ten-Inch Record," whose clever lyrics went like this:


On this particular song, Jackson is backed by Tiny Bradshaw's orchestra, and he also gets to play some zesty saxophone. It is a hilarious jump blues whose beat—like most records of this kind—prefigures rock and roll and whose witty lyrics were considered racy at the time but are, of course, rather mild by today's standards. Ironically, although Jackson toured far and wide in the late forties and throughout the fifties, the arrival of rock and roll brought his career (as it did the careers of many other artists of his kind) to a halt. Although in 1961 he re-recorded his early hit, "I Love You, Yes I Do" for a small independent label, he would soon quit touring, and for the next two decades or so took a job with a catering company that worked for Howard University in Washington, DC. It seemed that this would be all we would ever hear from Bull Moose, but in the 1980s, he did enjoy a sort of a comeback, however brief, when the Pittsburgh band, The Flashcats, who had been singing some of his songs for years, conspired to bring him out of obscurity. Jackson recorded a fine album with them, Moosemania! (which was fortunately reissued on CD by Bogus Records in 1992 as The Final Recordings) and even did some live appearances, but this comeback was sadly cut short by Jackson's failing health. Bull Moose Jackson passed away shortly thereafter, in his hometown of Cleveland in 1989, at age 70. 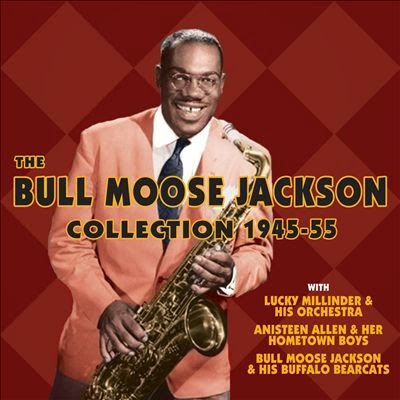 Anyone who wishes to dig deep into Jackson's split musical personality should locate The Bull Moose Jackson Collection 1945-1955 (Acrobat, 2013), a fantastic two-CD set that contains all his best recordings, made over a ten-year period when he was in his absolute prime. Here you will find both Jekyll and Hyde, both the sweet and the lowdown, both the romantic crooner and the saucy jump bluesman. Many of his fine records with Millinder are included, as well as sides that feature female vocalist Annisteen Allen, and of course, all of his hits for King with his own band, the Buffalo Bearcats, and even his r&b covers of country and western hits. Though Bull Moose may not be as popular today as he was in his heyday, his recorded output that is wisely anthologized in this set definitely needs to be rediscovered and enjoyed because it is simply wonderful music.

Those interested in finding out more about Bull Moose Jackson should check out this interesting tribute website put together by Bogus Records.

Posted by Anton and Erin Garcia-Fernandez at 12:53 PM No comments: