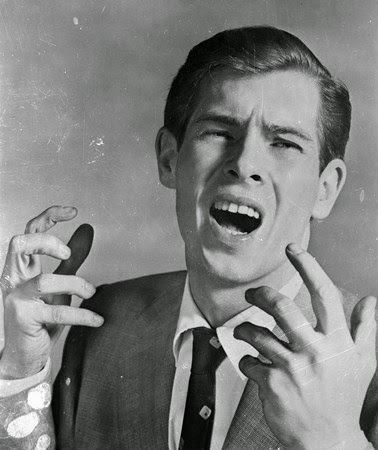 Johnnie Ray's all-too-brief hit-making days provided, as many critics have already pointed out, a link between classic pop and rock'n'roll. Born in Oregon in 1927, Ray soon became fascinated with black music, and in fact, in his own, instantly recognizable style we can easily hear echoes of jazz, rhythm & blues, and gospel. Although he will forever be associated with his 1951 blockbuster "Cry," which inaugurated the genre of the so-called "sob ballad," Ray successfully recorded quite a bit of rhythm & blues and always included one or two religious songs in his supper-club act, something that was rather unusual in such a context. All of these influences, together with his stage histrionics, combined to produce a very exciting style that was unmistakably Ray's own: as exaggerated, dramatic, and frenzied as it all often was, there is no doubt that Ray was doing something that no white popular singer had done before, and that earned him adulation and criticism in almost equal parts. Among his admirers was a very young Bob Dylan, who in his autobiography singles him out as one of the very first performers to whom he was drawn. Even early rock critic Nik Cohn, who usually does not lavish praise on any pop singers prior to Elvis Presley and who claims that Ray could not sing, states in his pioneering study Awopbopaloobop Alopbamboom: The Golden Age of Rock (1970) that "he generated more intensity than any other performer I ever saw in my life, Judy Garland excepted, and it was impossible not to feel involved with him" (13). In that same book, Cohn vividly describes a Johnnie Ray stage show:

He'd hunch up tight into himself, choke on his words, gasp, stagger, beat his fist against his breast, squirm, fall forward on to his knees and, finally, burst into tears. He'd gag, tremble, half strangle himself. He'd pull out every last outrageous ham trick in the book and he would be comic, embarrassing, painful, but still he worked because, under the crap, he was in real agony, he was burning, and it was traumatic to watch him. He'd spew himself up in front of you and you'd freeze, you'd sweat, you'd be hurt yourself. You'd want to look away and you couldn't. (13-14) 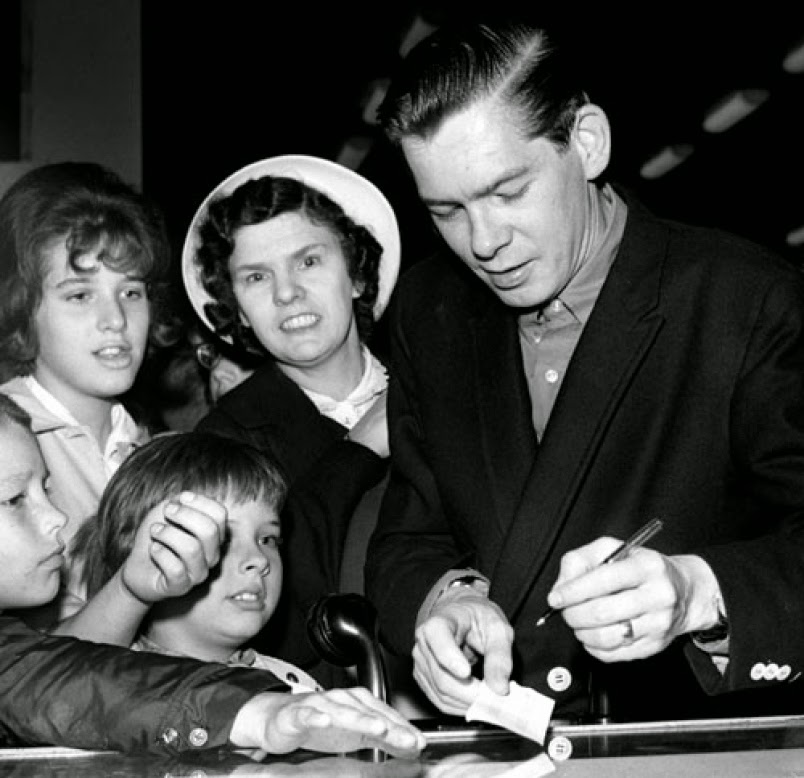 Of course, many black entertainers had been putting on this kind of act for years before Ray, but he was one of the first to bring this type of antics into the mainstream of pop. And as good as many of his studio records are (his catalog has been reissued by the German label Bear Family on two five-CD box sets entitled Cry and Yes, Tonight, Josephine), the art of Johnnie Ray is best appreciated live on stage, when he is working in front of an audience. Perhaps he or his label, Columbia Records, sensed this, because two excellent live albums by Ray were released in the 1950s, his period of major stardom—Live at the London Palladium came out in 1954, and Johnnie Ray in Las Vegas appeared in 1958. 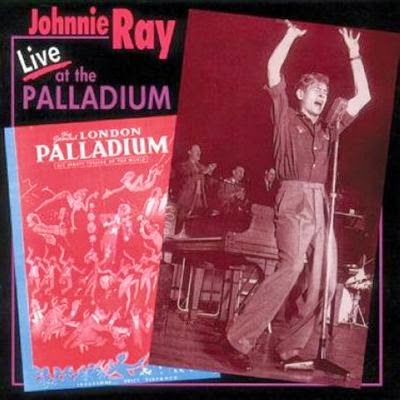 The former, reissued by Bear Family in 1999, captures Ray in his heyday, performing at the prestigious London Palladium on April 5, 1954, before a very appreciative audience of screaming fans. Though very short, at only 11 songs and a mere 32 minutes, this is a fantastic document of the singer at the peak of his career, singing some of his recent hits, such as "Cry," the self-penned "The Little White Cloud that Cried," and "Walkin' My Baby Back Home." He also reaches back for older tunes with which he always did very well (the rousing opener, "Please Don't Talk About Me When I'm Gone," "Glad Rag Doll," "Somebody Stole My Gal") and handles intimate ballads like "As Time Goes By" and "A Hundred Years from Today" very adroitly. By the time he attempts the Drifters' "Such a Night" (covered by Elvis on his 1960 album Elvis Is Back), I cannot help but wonder whether Belgian chanteur Jacques Brel knew of Ray and was influenced by his powerful stage persona. As he often did, Ray closes his Palladium set with a gospel song, "I'm Gonna Walk and Talk with My Lord," and has everyone in the house on their feet and clapping along. Though the inclusion of a newly written essay on the concert would have been desirable, the CD reissue is up to Bear Family's usual high standards, with a 20-page booklet featuring photos, newspaper clippings, and even an article written by Ray himself and published in the New Musical Express at the time of his Palladium appearance. 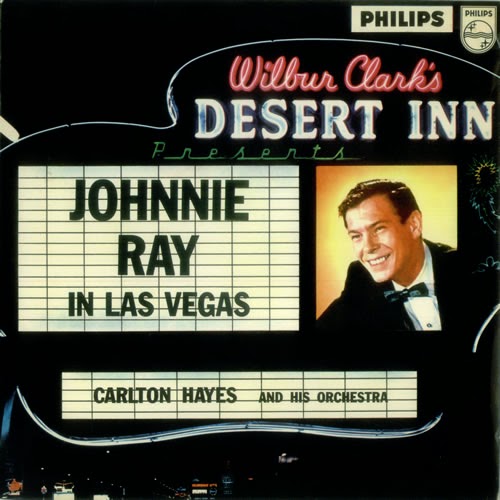 Four years later, Columbia released Johnnie Ray in Las Vegas, a 12-song live set recorded at the Desert Inn. By this time his career had fizzled somewhat due in part to the advent of rock'n'roll, although he had scored a couple more hits, "Yes Tonight, Josephine" and the Prisonaires' "Just Walking in the Rain," which he performs during this Vegas engagement. Inevitably, some of the tracks on this album overlap with those he had done on the Palladium set, including "Cry" and "Little White Cloud" (done here as a medley) and also "As Time Goes By" and "Talk with My Lord," which he again uses as the closer. The set list includes yet another spiritual, Sister Rosetta Tharpe's "Up Above My Head," which he had cut as a duet with Frankie Laine and which he sings here with the usual abandon in which he indulged when handling this sort of material. A combination of evergreens ("Ain't Misbehavin'," "Coquette") and ballads ("Yesterdays") rounds out the show, and his most intimate side comes to the fore in his beautiful rendition of Ted Koehler and Rube Bloom's "Don't Worry 'Bout Me." Like the recording from the Palladium, this LP catches Ray during a very inspired live appearance, but here he somehow sounds like a more seasoned performer. As the anonymous liner notes claim, "he catches the mood and temper of the assembled crowd and plays with it and to it, building from his opening number to a tingling pitch of excitement." The album was reissued on CD by Collectables Records in 2002 together with 1959's 'Til Morning, a jazzy collection of standards on which he is accompanied by the Billy Taylor Trio, which was apparently a quartet. 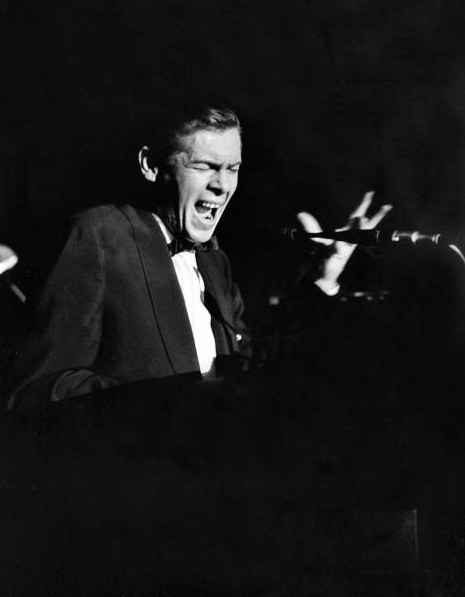 As a kid I heard Johnnie Ray singing "Cry" on the radio and was immediately mesmerized. By that time it was too late for me to get to see him perform live, since he had long quit touring. There is no doubt that Ray's natural habitat was the stage, though, where he could sing and shout and wail and fall down on his knees, where he could single-handedly electrify any audience. Unfortunately, these days not too many people seem to even remember Johnnie Ray at all, but these two live albums are ample proof of the uniqueness of the man's artistry in the perfect context for any listener to enjoy it.

Here is Johnnie Ray himself on television in 1957 singing his signature tune, Churchill Kohlman's "Cry," followed by one of his then-recent recordings, "Soliloquy of a Fool":

Posted by Anton and Erin Garcia-Fernandez at 11:58 AM No comments: