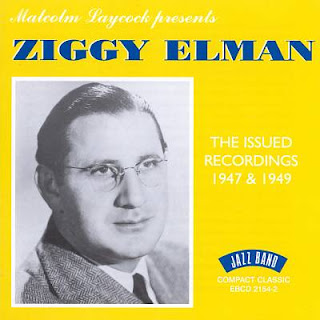 Following a couple of trips to Nashville and Memphis, this new installment in our Vintage Records Review Desk series features recent purchases that I have been playing quite a bit in the past few weeks. Though some of these recordings are rather obscure, all of them are highly recommendable additions to anyone's collection. A compilation of sides by the orchestra led by trumpeter Ziggy Elman, a live recording of Benny Goodman with Anita O'Day, and CDs by vocalists Bob Manning, Johnny Desmond, and Dorothy Carless will be under critical scrutiny this time.

We begin with Philadelphia-born trumpeter Ziggy Elman, one of the best and most popular star soloists of the Swing Era, a multi-instrumentalist who was also proficient on alto sax and trombone. Elman became known primarily through his association with Benny Goodman (he appeared at Goodman's landmark concert at Carnegie Hall in 1938) and Tommy Dorsey, with whom he worked off and on in the 1940s. After World War II, and just as the heyday of the big bands was coming to an end, he formed his own orchestra and made some outstanding recordings for MGM in New York and Los Angeles. All the sides that are known to have been released are compiled on The Issued Recordings 1947 & 1949 (Jazz Band, 2000). Though not commercially successful at the time, these are very appealing recordings superbly played by a band that at different times included great musicians such as Charlie Shavers, Babe Russin, Heinie Beau, Buddy DeFranco, Louis Bellson, Buddy Cole, and Perry Botkin, among others. Most of the charts were thoughtfully arranged by Sid Cooper, with highlights including "How High the Moon," "Body and Soul," and "I'll Get By," as well as tunes usually associated with Elman, such as "Zaggin' with Zig" and his own classic composition "And the Angels Sing." Vocals were provided by two fine, though now mostly forgotten singers: Virginia Maxey and Bob Manning. For more information on Ziggy Elman, you can find a very interesting article here. 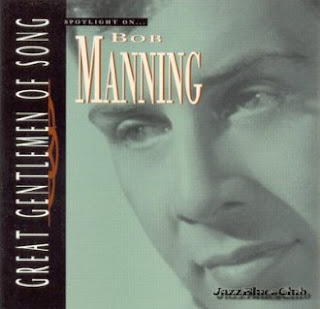 Speaking of Bob Manning, he may very well be one of the most under-recorded vocalists in the history of popular music, which certainly is a pity, because his voice was fantastic and had a romantic, soothing tone that should have turned him into a major star. But perhaps he arrived on the scene a little too late, making most of his best solo recordings in the 1950s, when the popularity of many former band vocalists like himself was in steady decline. As a result, the only CD compilation of his Capitol output currently available is the eighteen-song Spotlight on Bob Manning (Capitol, 1994), which leaves us yearning for more. All the tracks were recorded between 1953 and 1955 and find Manning backed by various studio orchestras conducted by Monty Kelly, although there are some titles made with Sid Feller, Nelson Riddle, and surprisingly, Bobby Hackett. Obviously influenced by Dick Haymes, Manning's warm baritone was at his best on ballads, which is what he mostly sings here, taking well-known standards such as "I Had the Craziest Dream," "These Foolish Things," "That Old Feeling," "You've Changed," and many others at very slow tempi that underscore the intimate nature of each song. Listening to these beautiful recordings, one cannot help but wish that some label would decide to release a more comprehensive collection of Manning's rather obscure body of work. 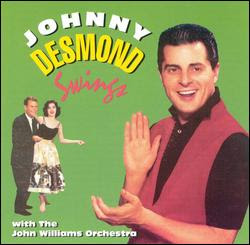 Another vocalist who began his career as a big band singer and later struck out on his own was Johnny Desmond. Not as well remembered today as other singers of the period, Desmond, unlike Manning, made his most enduring recordings in the 1940s, at a time when his popularity among World War II servicemen earned him the nickname of "the G.I. Sinatra." Indeed, throughout the forties, he was a featured vocalist with Bob Crosby, Gene Krupa, and Glenn Miller, making a series of radio broadcasts with Miller in Europe that even called for him to sing in German! Desmond was a constant presence in the charts until the early 1950s, and in January 1958, he recorded his best album, simply titled Johnny Desmond Swings (Pickwick, 1997) and produced by Dave Pell for the Tops label. The album was one of John Williams' early arranging assignments, and it is very clear that he had been listening closely to Frank Sinatra's classic Capitol LPs arranged by Nelson Riddle and Billy May. Some of Williams' arrangements work really well ("There's a Small Hotel," "All of You," "This Can't Be Love"), while some others are a little overdone ("I Got Plenty of Nuttin'," "It Ain't Necessarily So"). Even some of the song choices point toward Sinatra here, and in my opinion, the most satisfying track on the album is the very pensive reading of "It's the Talk of the Town." Again, it really is too bad that Desmond did not get a chance to make more albums like this. 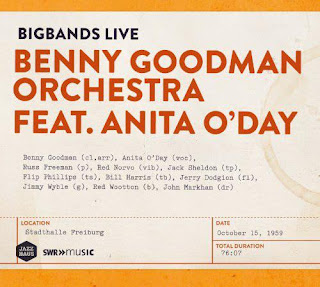 From Germany comes a very interesting release, which is a part of an ongoing series of live big band recordings and bears the title of Benny Goodman Orchestra Feat. Anita O'Day (Jazzhaus, 2011). The concert, recorded in Freiburg in October 1959, is notable because it marks one of the few instances when Benny Goodman and Anita O'Day performed together. Goodman always showed a keen ear for talent, and his band on this date includes Russ Freeman (piano), Red Norvo (vibraphone), Jack Sheldon (trumpet), Flip Phillips (tenor sax), Bill Harris (trombone), Jerry Dodgion (flute), Jimmy Wyble (guitar), Red Wootton (bass), and John Markham (drums) and is one of the best outfits that he put together in the 1950s and '60s. Yet the performance becomes truly electrifying when O'Day walks onstage to sing classics such as "Honeysuckle Rose," "Gotta Be This or That" (whose lyrics Goodman suddenly forgets!) or a bluesy medley that comes halfway through the concert and is one of the highlights of the CD. The sound is excellent, and although the liner notes in English and German are a little sparse, this is a very valuable addition to any Goodman or O'Day collection. 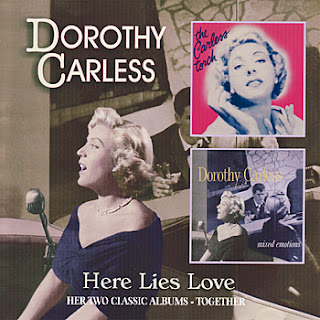 Very popular with audiences in her native Great Britain in the 1930s and '40s as a featured vocalist with great dance bands such as that of Ray Noble (very briefly at the beginning of her career), Bert Ambrose, and most of all, Geraldo, the name of Dorothy Carless remains largely obscure in the United States, even though she actually spent an important part of her life and made some fine recordings over here. Her two best albums, both recorded in New York in 1957 for the small Hi-Fi label, are gathered in one fantastic CD titled Here Lies Love (Flare, 2009), augmented by two unrelated tracks cut in 1949. On the first of these two LPs, The Carless Torch, she is backed by a trio led by guitarist Barney Kessel as she tackles twelve torch songs including standards like "It's Easy to Remember," "Ev'ry Time We Say Goodbye," "My Old Flame," and "I'll Never Be the Same," as well as lesser-known gems such as "Baby, Baby, You're the One" and "Too Late Now." The drumless trio of guitar, vibraphone, and bass suits Carless' voice perfectly well, and as we listen we discover echoes of June Christy here and Julie London there. But Carless was also adept at playing piano, as she shows on the second LP, Mixed Emotions, as she sits at the keyboard and accompanies her own singing. The material here is not all that different from that on the album with Kessel, mixing well-known tunes ("Little Girl Blue," "I Get Along without You Very Well," "One for My Baby") with rarely heard ones (Harold Arlen and Johnny Mercer's "Fancy Free," Cole Porter's "Were Thine That Special Face"), and Carless' piano playing is often sparse and intimate. One wishes that the liner notes of the CD edition were a little more detailed and informative, but the two albums definitely fall under the category of hidden treasures that need to be rediscovered, and hopefully this British release will do its part to bring Dorothy Carless the recognition that she deserves.

Posted by Anton and Erin Garcia-Fernandez at 12:52 PM 2 comments: