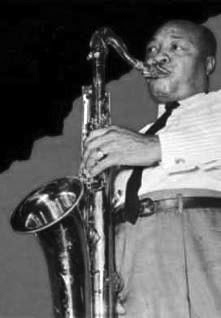 About an hour southeast of Martin, Tennessee, where my wife, our two-year-old daughter, and I live, lies the small town of Lexington, right by Interstate 40, halfway between Nashville and Memphis. It was there that the great saxophonist Sam Taylor, later nicknamed "The Man," was born in July 1916. Taylor developed a powerful honking sax sound that graced countless jazz and rhythm and blues recordings in the 1930s and 1940s, and in the 1950s he was in great demand as a session musician, playing on many memorable rock'n'roll records. Taylor was a very versatile saxophonist who always sounded like he was having fun on the bandstand and in the studio, and his energy was infectious. It is impossible to listen to any of his classic tunes, like "Cloudburst" or "The Big Beat," and not feel that energy. As notable as his work as a sideman is, Taylor cut comparatively few records as a leader, and among his most popular solo outings are the mood albums he made while touring Japan in the 1960s and 1970s, which may seem like a contradiction but is actually a testament to his versatility.

Taylor's professional career began in the late 1930s, as a member of the band led by Scatman Crothers, and throughout the '40s he would work with Lucky Millinder, Cootie Williams, and most importantly, Cab Calloway, with whom he toured extensively. As we can see, his r&b credentials are top notch, which perhaps explains why his wild honking sax style was so appreciated in the 1950s, particularly after the arrival of rock'n'roll. Around this time, Taylor began doing regular studio work with the likes of Louis Jordan, Ray Charles, The Drifters, Lavern Baker, Chuck Willis, and Big Joe Turner; as a matter of fact, he plays on Turner's classic recording of "Shake, Rattle and Roll." Toward the latter part of the '50s he made a series of excellent albums for MGM, including a 1957 collaboration with Dick Hyman that has yet to be reissued on CD. Taylor also worked on and off with a studio-only group called The Blues Chasers—other great jazzmen like Milt Hinton, Panama Francis, and Taft Jordan were also part of the band—and in the 1960s and '70s, he played frequently in Japan, where he had built up quite a following over the years, and where he cut a number of instrumental mood albums. With their soft string arrangements and ethereal choirs, these records are a far cry from the r&b sessions of the '40s and '50s, and if we are still interested in listening to them today, it is primarily for Taylor's elegant, soulful solos. 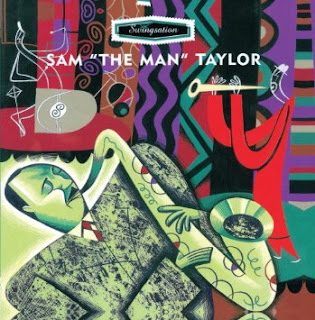 Unfortunately, CD reissues of his work have not been extensive. The most readily available compilation is Swingsation: Sam "The Man" Taylor (Verve, 1999), which includes only fourteen slices of his r&b and rock-inflected recordings of the mid-1950s. Here we find The Man at his honking best, on classics such as "Oo Wee," "Ride, Sammy Ride," "Fish Roll," "Real Gone," and "Road Runner." He is credited as the writer of some of these exciting rocking ditties, like "Taylor Made" and the sultry "Sam's Blues," and he is accompanied mostly by Haywood Henry on baritone sax, Freddie Washington on piano, Lloyd Trotman on bass, and Panama Francis on drums. On "Let's Ball," also written by Taylor, Alan Freed provides some shouting. This compilation is undoubtedly a good place to start for those who may want to get introduced to Taylor's music. The more serious fan should also look for two other European releases that are still fairly easy to track down at the time of this writing. 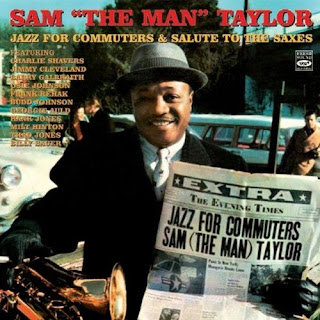 One of them, Jazz for Commuters & Salute to the Saxes (Fresh Sound Records, 2008), features sessions from 1956 and 1958 that find Taylor in the stellar company of Charlie Shavers, Georgie Auld, Thad Jones, Milt Hinton, Budd Johnson, and Hank Jones, among many others. These recordings present The Man at his swinging best, showcasing his always attractive mixture of jazz and r&b. Finally, Mist of the Orient (Sepia Records, 2014) is a fine example of Taylor's atmospheric recordings that were popular in Japan in the 1960s and '70s, and is also a worthwhile addition to the collection if only because of the beautiful sax solos and because the market is definitely not flooded with releases by Taylor. Anyone who appreciates the boisterous sound of a good honking saxophone played with elegance and ease should check out Sam "The Man" Taylor. As for me, every time I drive through Lexington, where Taylor passed away quietly in October 1990, I cannot help thinking of him. 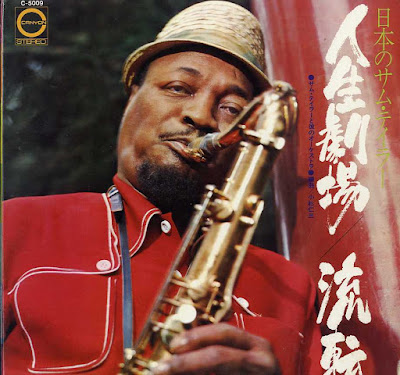 Posted by Anton and Erin Garcia-Fernandez at 8:58 AM No comments: 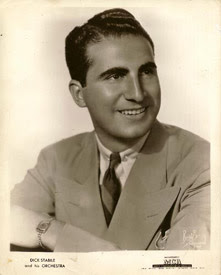 Reading the excellent book Popular American Recording Pioneers, by Tim Gracyk and Frank Hoffmann, I recently found an allusion to a series of articles entitled "Famous Bandmasters in Brief," originally published in the magazine Jacobs' Orchestra Monthly in the 1910s. This gave me the idea for a new series of posts for The Vintage Bandstand, which I will call "Lesser-Known Bandleaders in Brief," and which will offer short portraits of bandleaders who either are not as well known today as they were in their heyday, or who were never able to achieve great popularity in the first place. This new series begins with an article devoted to Dick Stabile, an accomplished saxophonist who is best remembered for his work as arranger and musical director for Dean Martin and Jerry Lewis but who made some very interesting recordings with his own band that are rather obscure today.

Born in Newark, New Jersey, on May 29, 1909, into a musical family, Dick Stabile was a fine alto saxophonist who had been around for quite a while by the time the Swing Era officially began. He had learned to play the saxophone as a teenager, and his first serious job had been with Ben Bernie's orchestra, but by the mid-1930s, he was already fronting his own band and making records for the Panachord and Decca labels, his band featuring vocalist Gracie Barrie, who would soon become his first wife. In his book The Big Bands, critic George T. Simon describes Stabile as "a handsome, smiling, gentle sort of Lothario" and praises "his amazing technique" (479), although he criticizes his ability to play real jazz, which actually sounds like too severe a judgment in the face of the excellent recordings that the Stabile band made between the 1930s and the 1950s. 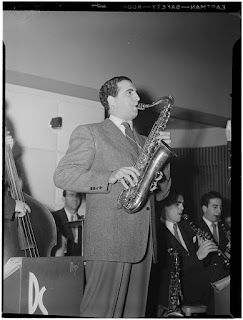 During World War II, Stabile joined the Coast Guard, and so his wife led the orchestra until his return to civilian life, when he reorganized the band and resumed touring. A January 1947 Billboard review of an appearance at the Aragon Ballroom in Ocean Park, California, during which Stabile shared the bandstand with the sweet band of Art Kassel, mentions that the outfit is only four weeks old and refers to its style as a "would-be hybrid cross between Boyd Raeburn and Tommy Dorsey" (31), but the tone of the reviewer is rather dismissive and overtly critical of the band's sound. At this point, George Siravo was among the arrangers working for the band, and his arrangements were complex and innovative, perhaps prompting the comparison with Raeburn's progressive approach to swing. 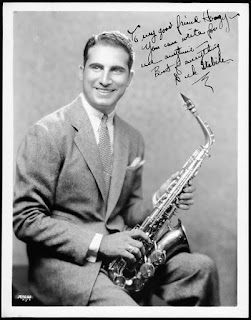 In 1949, while playing at Ciro's, in West Hollywood, Stabile met Dean Martin and Jerry Lewis and soon became their musical director, remaining close friends with both men until the end of his life. Stabile also wrote the charts for Dino's Capitol albums Dean Martin Sings and Swingin' Down Yonder (you can read more about these albums here), as well as accompanying both Martin and Lewis on radio and television even after they broke up their act together (you can see Stabile playing "The Man I Love" on television with Martin and Lewis here). The 1950s were successful years for Stabile, as he was involved with popular Martin hit recordings such as "That's Amore" and "Memories Are Made of This," but throughout the 1960s and '70s he concentrated on leading orchestras at various hotels in California, his last notable job being as leader of the band at the Roosevelt Hotel in New Orleans, where he passed away on September 18, 1980, following a heart attack. 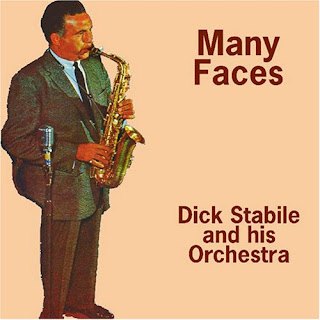 The only CD compilation of Stabile's work currently available is the very interesting British import Many Faces (Montpellier Records, 2008), which includes material from sessions recorded in 1955 and 1957, with arrangements courtesy of Russ Garcia. Though this is already rather late in Stabile's recording career, the orchestra has not lost any of its vigor, and it sounds crisp, clear, and engaging, powered by Stabile's highly polished saxophone technique. The 24 tracks on the CD justify its title, showing that Stabile was definitely a musician of many faces, tackling ballads and uptempo numbers with equal ease, sometimes indulging in his trademark runs ("Many Faces" is a fine instance of this) but also offering thoughtful solos of great beauty. While it is true that the Stabile band relies heavily on arrangements and leaves little room for improvisation, the jazz content of many of Garcia's charts is undeniable (listen to "Just You, Just Me" or "Tenderly" if you are looking for two examples) and some of the tracks even find Stabile experimenting with Latin rhythms ("Hong Kong Cha Cha") and melodies out of the classical tradition ("Ballet Bleu"). This is the perfect—and, at the time of this writing, alas, the only—place to get a proper introduction to the very exciting and often surprising sound of Dick Stabile, and it is well worth giving it a try.

Posted by Anton and Erin Garcia-Fernandez at 8:07 AM 2 comments: