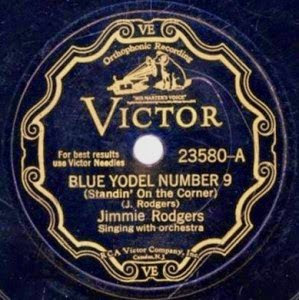 Today we take a trip back to Hollywood, where in July of 1930, a young Louis Armstrong and country singing star Jimmie Rodgers teamed up to make a wonderful record that brought together jazz, blues, and country music—"Blue Yodel # 9."

When, in 1970, Louis Armstrong released Louis 'Country & Western' Armstrong, a full LP of country songs, many critics and fans were outraged, considering that this was the ultimate sign of the trumpeter's selling out to the white music establishment. While I must admit that I have a hard time digesting that album, my objections have more to do with the quality of the arrangements and of Armstrong's vocal performances than with the fact that he is singing country music. After all, about four decades before, he had participated in one of the sessions that puzzled his biographers and discographers the most—the one where he played trumpet behind The Singing Brakeman himself, the great pioneering country singer Jimmie Rodgers, on "Blue Yodel # 9," also known as "Standin' on a Corner."

Nobody seems to know exactly how this encounter came about, and in their biography of Armstrong, Max Jones and John Chilton refer to it as an "improbable partnership" and "one of jazz's unsolvable riddles" (236). Yet this collaboration was not really as improbable or strange as it may seem. For one thing, Rodgers had been making jazz-influenced and bluesy country records for about three years, titles such as "Jimmie's Mean Mama Blues," "Gambling Polka Dot Blues," and "Long Tall Mama Blues." By 1930, he had become the number one country star at Victor Records, and his sessions were supervised by Ralph Peer, the record executive who had discovered him, and who was acquainted with Armstrong from his days at Okeh Records. In his authoritative biography of Rodgers, Nolan Porterfield conjectures how the date may have been put together: "One may assume that Rodgers's very brief association with the great Satchmo was merely a natural result of Peer's acquaintance with both performers. Armstrong had only recently moved to the West Coast and was anxious to get whatever work her could find" (258-259).

Whatever the case, Satchmo and the Singing Brakeman only cut this one track together, the ninth in the series of thirteen Blue Yodels that Rodgers had begun in 1927 with his first big hit, "Blue Yodel (T for Texas)." Penned by Rodgers, "Blue Yodel # 9" seems to be loosely based on "Frankie and Johnny," complete with Rodgers's trademark bluesy yodeling, and the story it tells ends abruptly, which according to Porterfield, can be explained by the limited amount of recording time allowed by old 78s, since apparently Rodgers had originally written three more stanzas that were left off the record. A third participant in the session was Lil' Hardin Armstrong, although her identity was open to debate for decades (it definitely did not help that neither of the Armstrongs is credited on the label), and some authors claimed that perhaps it could be Earl Hines. However, Porterfield posits that it is indeed Lil' Armstrong playing the piano and backs up his claim with the evidence of Rodgers's original lyric sheet, which reads: "Recorded in Hollywood 7-16-30. Louis Armstrong Trumpet, Lillian on piano" (260). In his recent biography of Armstrong, Pops: A Life of Louis Armstrong, Terry Teachout agrees that Lil' Armstrong is the pianist on the session, noting that she "joined him for a short-lived reconciliation" and that their side with Rodgers was "their last record together" (150).

"Blue Yodel # 9" is a remarkable recording, both for the quality of the performance and for the fact that it stands as an example of a time when different musical styles were not as rigidly defined by the industry as they later became, and they often interacted with one another in the studio. The record begins with a trumpet introduction by Louis, strongly supported by Lil's piano, which already makes it clear to the listener who is familiar with Rodgers's brand of country music that this is going to be a different blue yodel. Jimmie's appealing singing is excellent throughout, and Louis does not seem to have any problem adapting to the country singer's idiosyncratic sense of timing, playing undeniably hot, though somewhat restrained, trumpet fills and launching into a characteristically bluesy solo halfway through the performance. Lil's piano accompaniment perfectly underscores Jimmie's singing and Louis's trumpet playing, and the only regret that one might have is that the trio did not cut any more tracks on that momentous occasion.

Three years after this encounter, in 1933, Jimmie Rodgers succumbed after a long and painful battle with tuberculosis, but his impact on country music would be felt for decades to come. Satchmo, of course, would go on to enjoy a long, successful career, recording not only jazz but also dabbling in other musical styles, and would ultimately become a cultural icon and be rightly recognized as one of the great musical innovators of the twentieth century. In a letter to a friend, both Porterfield and Teachout tell us, he expressed disbelief at the criticism leveled against him for his 1970 country album, stating that such a project was "no change for me, daddy. I was doing that same kind of work forty years ago." And "Blue Yodel # 9" is proof of that—a little record, forgotten by many, that transcended stylistic, social, and racial barriers.

The track is available on countless Jimmie Rodgers compilations, such as the budget-priced The Singing Brakeman (Country Stars). The French import, The Blues 1927-1933 (Frémeaux & Associés), includes all his blue yodels and other blues-influenced sides. For those who would like to own all of Rodgers's known recordings, there is a cheaper option in Recordings 1927-1933 (JSP Records) and a more expensive one in the monumental German import The Singing Brakeman: 1927-1933 (Bear Family).

Posted by Anton and Erin Garcia-Fernandez at 4:47 PM