Connie Haines, A Nightingale with a Southern Accent 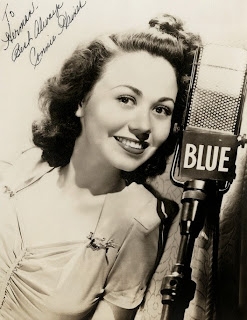 A fantastic 2008 release from the British label Sepia Records works well as an excuse to take a look at the career of Connie Haines, one of the most swinging and most exciting female singers of the Swing Era, who is unfortunately not as well remembered as other contemporaries such as Peggy Lee, Jo Stafford, and Helen Forrest.

If ever there was a band singer who devoted most of her life to showbusiness, that was Connie Haines. Born in Savannah, Georgia, in 1921, her whole name, Yvonne Marie Antoinette JaMais, was too long and not very commercial, so when she joined the Harry James orchestra, the trumpeter asked her to change it. But Haines could be found singing over the airwaves well before that, and by the age of ten she already had her own radio show in Jacksonville, Florida, since her family had moved to the Sunshine State. At that early stage of her career she was billed as "The Little Princess of the Air," and although her charming southern accent would have certainly qualified her for performing western swing or country music, she preferred to stick with swing and pop. After moving to New York, where she was appearing at the Roxy Theater by the time she was fourteen, Haines began to make the rounds of the nightclubs there, which would ultimately lead her to join the Harry James band in 1939, at the time still a struggling outfit trying to make headway in the big band business.

It was precisely at this time that Haines first crossed paths with Frank Sinatra, who had also been discovered by James and was still beginning to develop his distinctive style. The careers of Haines and Sinatra would remain intertwined for at least a couple of years, because one year later, both singers would be hired away by Tommy Dorsey, who led one of the most successful and jazz-infused orchestras in the country. The trombonist also had one of the most inventive arrangers of the period in Sy Oliver, and realizing the selling potential of singers, he was starting to feature his vocalists more prominently on his records, giving them more than just brief refrains to sing and building whole arrangements around them. Besides Haines and Sinatra, Dorsey also employed Jo Stafford and the vocal group The Pied Pipers, and all of them appear in classic recordings such as "Snooty Little Cutie," "Oh, Look at Me Now," and "Let's Get Away from It All." On the latter we can hear Sinatra poking fun at Haines's southern accent: when the lyrics call for her to sing the line, "I'll get a real southern drawl," Sinatra jokingly replies in feigned amazement, "Another one?" In his book Sinatra: The Song Is You, Will Friedwald mentions that, according to Haines, she and Sinatra did not get along, but if that is true, it does not come across in their records together, which are always a lot of fun to listen to. Dorsey also had the good judgment to feature Haines on her own on several fine numbers, such as Cole Porter's "What Is This Thing Called Love?" and Matt Dennis and Tom Adair's "Will You Still Be Mine?" but by 1942 she had decided to follow the example of Young Blue Eyes and launched a solo career. 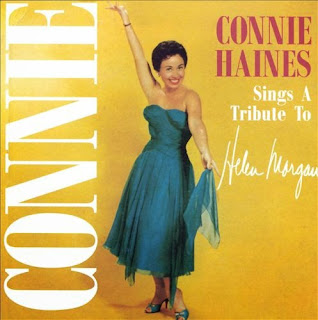 Haines always credited Dorsey with teaching her how to phrase—another thing that she and Sinatra had in common—and by the time she left the band, she had grown quite a bit as a singer and was ready to strike out on her own. Another important influence was torch singer Helen Morgan, to whom she would dedicate a whole album entitled Connie Haines Sings a Tribute to Helen Morgan in 1957. As a solo attraction, Haines performed on radio on the Abbott & Costello Show, and in the 1950s she appeared regularly on television, on such popular programs as the ones hosted by Ed Sullivan, Milton Berle, and particularly on the Frankie Laine Show. She was also featured in a few now-forgotten musicals, including Robert Z. Leonard's Duchess of Idaho (1950), alongside Van Johnson and Esther Williams. Haines recorded steadily for both major and smaller labels (Capitol, Mercury, Columbia, Signature, and Coral are just a few examples) and although she became primarily known for novelty numbers, her discography includes everything from ballads to torch songs to country-tinged material, and in tandem with Jane Russell, Rhonda Fleming, and Beryl Davis, she even delved into gospel and sacred territory. What is more, though her recording activity had decreased by the 1960s, she still found time to cut a few Smokey Robinson songs for Motown, of all labels. Songs like "Midnight Johnny" and "What's Easy for Two" are a big departure from her usual style, but they are definite proof of her willingness to adapt to changing tastes in popular music. Despite having to battle cancer in her later years, Haines kept performing for live audiences off and on until the 1990s, and she died at 87 in Clearwater Beach, Florida, in 2008. 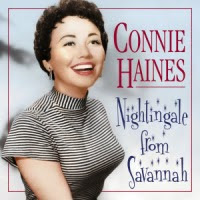 While her sides with Tommy Dorsey are fairly easy to find on CD, the Sepia release Nightingale from Savannah draws from her post-Dorsey years, featuring 27 tracks she recorded between 1946 and 1953 for Mercury, Signature, and Coral. It seems clear that these labels were trying to sell her mainly as a sprightly novelty vocalist, as titles such as the 1949 hits "You Told a Lie" and "How It Lies, How It Lies, How It Lies" suggest. Other novelty tunes she cut around this time are "Shoo-Fly Pie and Apple Pan Dowdy" (a hit for Dinah Shore), "Let's Choo Choo Choo to Idaho," and "A Bushel and a Peck," among many others. Like her hit, "How It Lies," many of her recordings have a certain country flavor to them, as is the case "Too Many Hearts" and "You Nearly Lose Your Mind," the latter a bluesy pop version of an Ernest Tubb country classic. 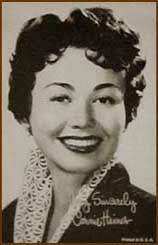 But Haines also felt comfortable singing ballads and torch songs—we must not forget the Helen Morgan influence—and even though she does not quite reach the depths of pathos and despair of a Billie Holiday or a Lena Horne, she turns out respectable readings of "My Man" and "Stormy Weather," sounds really believable on the old chestnut "You Made Me Love You," and on "Lover Man" and "The Man I Love" she proves that she can also handle a small-group jazz setting with ease. Her 1947 remake of her Dorsey hit "Will You Still Be Mine?" with the Ray Bloch orchestra includes updated special lyrics that mention, among other celebrities, Sinatra, FDR, Bing Crosby, Vaughn Monroe, Walter Winchell, and J. Edgar Hoover! Her version of the Teresa Brewer song, "Ol' Man Mose," prefigures her later gospel-inflected recordings, and among the highlights of the collection are her duets with Alan Dale on the Dixieland-ish "The Darktown Strutter's Ball" and her old friend Bob Crosby on "Destination Moon" and "What Have You Done for Me Lately?" Listening to this Sepia compilation, it becomes clear that Connie Haines is an unjustly overlooked figure of the Swing Era, a versatile vocalist with a subtle, charming southern drawl who deserves to be rediscovered.


Other Selected CDs by Connie Haines

In spite of its awful cover, Kiss the Boys Goodbye (Bygone Days Records) features several of Connie Haines's recordings with Tommy Dorsey (both as the single spotlighted vocalist and with Sinatra, Stafford and the Pipers), as well as a good sample of her post-Dorsey sides. The aforementioned Connie Haines Sings a Tribute to Helen Morgan (Pickwick Records) is a worthwhile addition to any serious Haines collection, while The Heart and Soul of Connie (Audiophile Records) includes sides from 1950 and 1951 on which she is backed by the Russ Case orchestra. Finally, Feel the Spirit (Jasmine Records) presents her sacred recordings with Jane Russell, Rhonda Fleming, and Beryl Davis.

Posted by Anton and Erin Garcia-Fernandez at 6:47 AM