Buddy Clark: The Untimely Death of an Overlooked Crooner 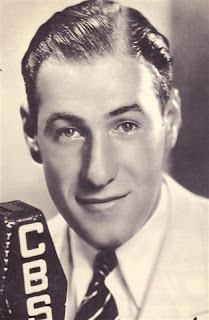 After a ten-month hiatus, The Vintage Bandstand returns with a long-overdue article on Buddy Clark, one of my favorite singers of the 1940s, whose untimely death in a plane crash in 1949 cut short a career that was then at the peak of its commercial success.

On October 1, 1949, a plane crashed on Beverly Boulevard. It had been chartered by Buddy Clark so that he and some of his friends could attend a Stanford vs. Michigan college football game and be back in Los Angeles in time for Clark to host a radio show. The tragedy ended the career of one of the most popular singers of the 1940s at a point in time when his popularity was reaching its peak. Although lately Buddy Clark has not received as much critical recognition as some of his contemporaries, like Bing Crosby, Frank Sinatra, and Dick Haymes, he was one of the most successful vocalists of his time. 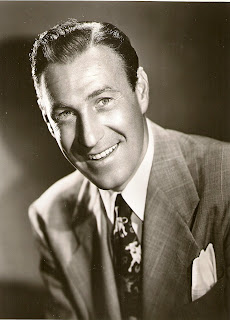 Born Samuel Goldberg in Dorchester, Massachusetts, in 1912, Clark was first drawn to sports but would soon take up music as a profession, singing on popular radio shows such as Your Hit Parade and Let’s Dance, the latter starring Benny Goodman and his orchestra. Like many other singers of the era, Clark was primarily influenced by the warm sound of Bing Crosby, which can be heard particularly in his early, lesser-known sides for Vocalion. Crosby’s influence aside, in time Clark would develop into a very recognizable singer, with a distinctly smooth and romantic approach to the vocal art that earned him quite a following. As Roy Hemming and David Hajdu noted, in the years when younger listeners favored Frank Sinatra’s intensely intimate style, Clark’s rich baritone appealed to “the middle-of-the-road listener who favored a more straightforward style of pop singing” (104). This style can be heard at its best in some of Clark’s recordings of the 1940s, particularly when he decided to revive older songs such as “That Old Gang of Mine,” “I’ll See You in My Dreams,” and “I’ll Get By,” the latter recorded by Bing Crosby as early as 1928. 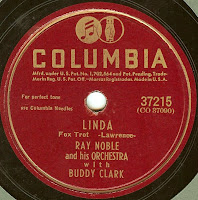 Though Clark was constantly heard singing live on radio and making radio transcriptions in the late 1930s and early 1940s, his career as a recording artist would not come into its own until 1946, when he was the featured vocalist with the Ray Noble orchestra on “Linda,” a Columbia recording that became an instant success and marked the beginning of a series of hits that was only cut short by his death a couple of years later. “Linda” is more of a skit than a song and includes some spoken sections: the lyrics present Clark’s character trying to talk a girl, Linda, on whom he has been keeping an eye for days, into accepting to go out on a date with him. The first three lines are memorable in their depiction of Clark’s light-hearted obsession with Linda:

Of course, as the song advances, Clark’s smooth crooning succeeds in breaking down the girl’s reticence and securing the date for Saturday night: “Boy, that’s a date!” says a delighted Clark toward the end of the song. With its very catchy tune, “Linda” topped the Billboard charts in 1947 and was so successful that about a year later Clark and Noble came up with a follow-up entitled “I’ll Dance at Your Wedding,” which did not achieve the same kind of success as its predecessor but which is also a very enjoyable recording.

After “Linda” hit the charts, Clark’s days as a vocalist on radio transcriptions that mostly used stock arrangements and on which he was often uncredited and backed by bands led by Freddy Martin, Eddy Duchin, and Benny Goodman, among others, were over. Hit recordings started pouring in, great sides like “How Are Things in Glocca Morra?,” Cole Porter’s “You’d Be So Nice to Come Home to,” and his revival of “Peg o’My Heart,” which have not received as much critical attention as their musical quality should have warranted. The last two years of Buddy Clark’s life were also filled with healthy record sales and chart hits, including a duet with Doris Day on “My Darling, My Darling” and another with Dinah Shore on the classic “Baby, It’s Cold Outside.” Shortly before his tragic death in the fall of 1949, Clark had taken to the stage in a production of the George and Ira Gershwin musical Girl Crazy, which could have in time opened the doors to Broadway. However, he would not have the opportunity to make it big on the stage, and the plane crash that claimed his life thwarted the wonderful career of a man who had certainly worked hard to achieve the success that he was finally enjoying. 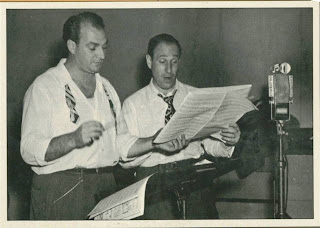 Unfortunately, not a lot Buddy Clark’s recorded output is readily available on CD, which could very well explain the neglect into which he has fallen as of late. Many fine compilations, such as Here’s to Romance (ASV Living Era) and Remembering Buddy Clark (Collector’s Choice), are out of print, and reissues of his 1930s recordings (Take Two’s Band Vocals from the Thirties, for instance) have also been discontinued. Therefore, the best and most affordable option available is the aptly entitled Linda, a collection released by Collectables Records featuring twenty-four of his recordings made between 1942 and 1949, ranging from a version of the novelty tune “K-K-K-Katy” with organ accompaniment to the delightful “A Dreamer’s Holiday,” his last chart entry, recorded in September of 1949. In between, there are a host of magnificent recordings that showcase Clark’s polished singing style, as well as his collaborations with arranger/conductor Mitchell Ayres, who directs the orchestra on Clark’s renditions of “It’s a Big, Wide, Wonderful World,” Bing Crosby’s perennial “Just One More Chance,” “If This Isn’t Love,” and “An Apple Blossom Wedding,” to name but a few. 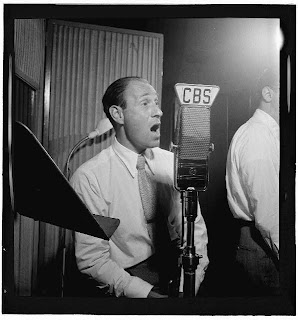 The compilation also includes Clark’s very enjoyable take on Edith Piaf’s “La Vie en Rose,” with an English lyric by Mack David entitled “You’re Too Dangerous Cherie,” as well as three Latin-flavored sides from 1946-1947 (“South America, Take It Away!,” “Chiquita Banana,” and “You Don’t Have to Know the Language”) on which he is accompanied by the great Xavier Cugat orchestra, proving his undeniable versatility and ease with novelty songs. The overall sound of the compilation is good, and the liner notes by Mark Marymont, albeit rather short, are quite informative. However, Buddy Clark’s recorded legacy deserves a more thorough CD reissue encompassing both the 1930s and 1940s that may help put his career into perspective and contribute to granting him the recognition that he deserves.

GIRL OF MY DREAMS (posted on YouTube by terracite)

Posted by Anton and Erin Garcia-Fernandez at 7:44 AM

Nice Bio! There are few on the web, and this is the best one I've seen. Was just listening to the Jass records and Take Two cds, and was wondering how and why his voice changed so much(and for the better) in the last few years of his life. Practice makes perfect? Conscious effort to change? Or did it just happen? Never heard anything about something that seems pretty obvious.

First of all, thanks for your comment. I am glad that you enjoyed my piece on Buddy Clark, who has always been one of my favorite vocalists from the 1930s and '40s. I think I own every CD of his that is currently available.

Regarding your question about the very obvious change in his voice in the last few years of his life I don't really have an answer, but I can speculate that Clark in the 1940s came into his own and finally found his own distinctive style. This is something that has happened to pretty much every vocalist worthy of praise. Thus, Bing Crosby's early records from the '20s and early '30s sound quite different from his classic Decca sides. Even though we can hear elements of the greatness to come, Frank Sinatra was still trying to find his voice on the records he made with Harry James and Tommy Dorsey. And Tony Bennett's early sides ("My Baby Just Cares for Me" is one of these) find him sounding not quite like himself. These are just a few examples, and I suppose that something similar happened in the case of Buddy Clark.

Thanks again for your comment, and I appreciate your reading The Vintage Bandstand!

Thank you for the Buddy Clark story. I remember the day he died. My grandmother broke the news to my mother (who I believe had gone to an Al Jolson radio program in Hollywood)that evening. My mom was a big fan of Buddy's and I still remember the 78s ("Baby, It's Cold Outside," "Highland Fling" and others)on our record player. That day in October, 1949 is still a sad memory for me.

Thank you for The Vintage Bandstand!

Thanks for your very nice comment. I am glad to read that you enjoyed my piece on Buddy Clark, which I wrote almost five years ago now. It's amazing how time flies!

I am a little young to remember the day of Clark's tragic death, but his music has always been an important part of my life, and I have collected every CD by him that has ever been available. I love his smooth, Crosby-influenced crooning style, and songs such as "Linda" and the ones you mentioned in your comment are classics of the era. I have no doubt that Clark would have had a brilliant future ahead of him had he not died following that fatal accident. He was definitely a classy singer whose important body of work from the '30s and '40s deserves a great deal of recognition.

P.S.: By the way, if you're interested, I publish another blog on jazz besides The Vintage Bandstand. It's called Jazz Flashes, and you may access it here: http://jazzflashes.blogspot.com

Buddy really was a changeable singer. It's not well known that he started out as a tenor - with just 2 recordings in the Gus Arnheim band in 1932.

My fellow dance band fans have told me it can't possibly be Buddy due to the range and purposefully formal phrasing, but I'm sold. Whoever this "Buddy Clark" was, he was as musicianly as the "real" one.

Thanks for your message! Like you, I believe the vocalist on Gus Arnheim's "Evening" is indeed the "real" Buddy Clark, even if his voice sounds different from what we can hear on his classic recordings of the 1940s.

In the 1930s, before hitting the big time, Clark spent a long time providing vocals for various bands, among them those led by Gus Arnheim, Freddy Martin, Benny Goodman, and Eddy Duchin. In the liner notes to the CD 'Band Vocals from the Thirties' (Take Two) Anthony Slide states that "Buddy Clark was a prolific recording artist, making more than 250 records between 1934 and 1949; the range and variant styles of the orchestras with which he performed are considerable." In the case of "Evening," he affects a more high-pitched kind of crooning, more prominent in the early '30s and very typical of many of the singers who recorded with Arnheim.

You may find this version of "Evening" on the CD 'The First Crooners, Vol. 2' (Take Two), and the vocalist definitely is the "real" Buddy Clark.

Thanks again, and I hope you keep visiting The Vintage Bandstand!