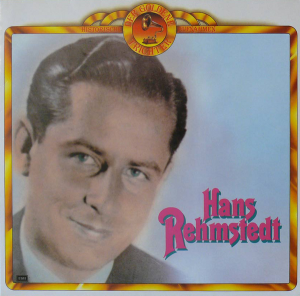 This time we are looking at recordings that spotlight German jazz and jazz-influenced artists from the 1930s, '40s, and '50s whose work is not particularly well known in the United States. We begin with a compilation of dance-band sides by the popular Tanzorchester led by Hans Rehmstedt, followed by an album showcasing the exciting singing and playing of one of its most notable graduates, vocalist/clarinetist Horst Winter. Then, we discuss a recent release of 1954 live recordings by the orchestra led by the German pianist and arranger Kurt Edelhagen, and finally we take a look at a unique collaboration between German pianist Jutta Hipp and American tenor saxophonist Zoot Sims, recorded for Blue Note in 1956.

In Germany, the years right before, during, and immediately following World War II marked the golden age of the Tanzorchester, the German dance bands who played for dancers and enthusiasts alike during the dark years of the Nazi regime. Like many of their British and American counterparts, these orchestras were characterized by both sweet and swinging sounds, and many of them featured musicians who were fascinated by hot jazz. This inevitably garnered some of these bands the opposition of the Nazi authorities, who saw jazz as unerwünschte Musik (that is, "undesirable music") in every way contrary to their ideology and political agenda, and actively sought to ban its performance both on German soil and in any Nazi-occupied territories. Often defying a ban that was rather difficult to put into practice anyway, some of these Tanzorchester kept on including jazzy solos and arrangements in their live performances and occasionally on their recordings. 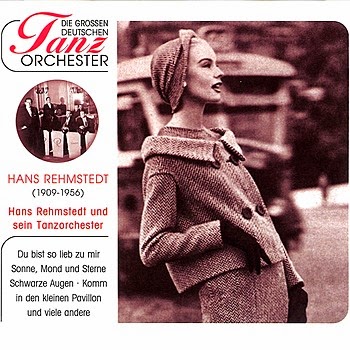 One of the most musically satisfying combinations of the period was led by Hans Rehmstedt, a violinist who was very active in the Berlin dance-band scene in the late 1920s and throughout the 1930s. His orchestras included some of the best German musicians of the time, many of whom, like Willy Berking, Michael Jary, and Benny DeWeille, would eventually graduate to leading their own successful dance bands. As we can hear on the volume devoted to Rehmstedt in the series Die Grössen Deutschen Tanzorchester (Membran Music, 2005), featuring recordings made mostly in the late '30s and early '40s, Rehmstedt had a keen ear for jazz-inflected playing, and virtually all the sides he cut were graced by very enjoyable, tightly knit arrangements. Though Rehmstedt occasionally wrote some of his material ("Zigeunerfox," for instance), many of the songs presented here are original compositions by trombonist Willy Berking ("Atlantis," "Klavierträume," "Zum Tanzen geboren"), and the orchestra even attempts a German adaptation of the onomatopoeic Charles Trenet hit "Boum," given the German title "Bum Bum." After the war, Rehmstedt's Tanzorchester disbanded, and he found work as the director of the Radio Bremen studio orchestra. He passed away in 1956, following a car accident, and leaving behind some very interesting recordings, many of which are available on this CD release from Membran. 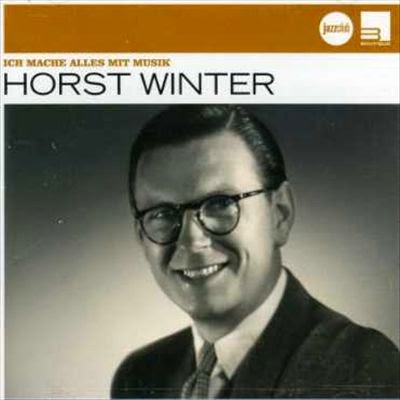 Besides being a fine musician and bandleader, Rehmstedt seems to have had a natural ability to recognize a good vocalist, and thus his orchestra featured some of the best singers of the day. Perhaps the most exciting of them all was Prussian-born Horst Winter, who was also an accomplished clarinetist and began his career singing vocal refrains with the Rehmstedt organization before forming his own orchestra in the early 1940s. The band's exciting, swinging arrangements and Winter's undeniably appealing vocal style are spotlighted on Ich mache alles mit Musik (Universal Music, 2003), the only compilation of Winter's work currently available in the United States, which includes sides made between 1941 and 1943. This is arguably the most interesting period of his career, characterized by a series of classic recordings that, like the one that lends its title to this CD, never fail to swing. These sessions find Winter at ease in a variety of settings, mostly leading a larger dance band, but at times also fronting a trio, a quartet, and a quintet. In addition to playing clarinet and sax, Winter also provides the vocal refrains, always charming and enjoyable, as in "Komm doch in meine Arme," "Ich nenne alle Frauen Baby," "Fräulein Madeleine," and "Frauen sind keine Engel," among others. One of the most popular artists to come out of the Tanzorchester era, he would represent Austria in the 1960 Eurovision Song Contest using the stage name Harry Winter and would devote his entire life to music, both classical and popular, even becoming a choir director in his later years. This 24-track collection is definitely the most appropriate starting point for anyone interested in getting acquainted with Winter's vintage swinging sound.

Here is a video of a 1960s television appearance by Horst Winter, who performs "Exactly Like You." 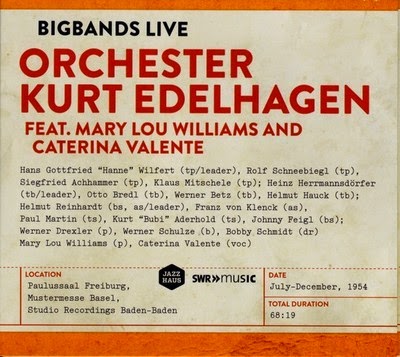 Though never a household name in the United States, pianist-conductor-arranger Kurt Edelhagen was one of the most popular jazz-influenced musicians in Germany, forming his first big band in the mid-1940s and performing and recording extensively through the 1970s. His orchestras usually featured talented sidemen such as Francy Boland, Wilton Gaynair, Jimmy Deuchar, Tubby Hayes, and Dusko Goykovich, and his inventive arrangements were modeled on the work of Stan Kenton. The music contained in Bigbands Live: Orchester Kurt Edelhagen (Jazzhaus, 2013) is a prime example of Edelhagen's sound in a live big band setting. Recorded at three different locations between July and December of 1954 in front of highly appreciative audiences, the eighteen tracks on this CD present Edelhagen at his most Kentonian, leaving ample space for hot solos by Hans Gottfried Wilfert on trumpet and Helmut Reinhardt on both baritone and alto sax. The set list is comprised mostly of standards ("Tuxedo Junction," "St. Louis Blues," "The Man I Love," "You Go to My Head") and pianist Mary Lou Williams joins the band on two of her excellent originals, "Blues on the Bongo Beat" and "Nancy and the Colonel." Singer Caterina Valente, a protégée of Edelhagen's, contributes two syncopated boppish vocals on "They Can't Take That Away from Me" and "Pennies from Heaven," even daring to scat a little on the latter. Overall, this is an outstanding collection of live recordings that should whet the listener's appetite for Edelhagen's prolific studio work.

Here is the Kurt Edelhagen Orchestra in Berlin in 1966, playing "Alice in Wonderland," with Jiggs Whigham on trombone and Bora Rokovic on piano. 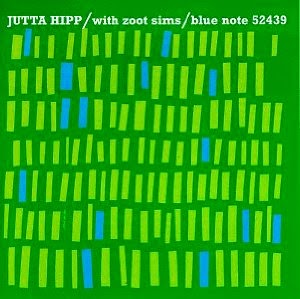 And, finally, we spotlight a rather obscure yet extremely satisfying collaboration. German pianist Jutta Hipp met versatile saxophonist Zoot Sims sometime in the 1950s in Germany, precisely during a European tour of the Stan Kenton band, of which Sims was a member at the time. Upon Hipp's move to New York City in 1955, at the behest of critic Leonard Feather, she encountered harsh criticism from those who believed that her style was too close to that of Lennie Tristano and, particularly, that of Horace Silver. But by 1956, when she appeared at the Newport Jazz Festival and cut this impressive session with Sims at Rudy Van Gelder's New Jersey studio, she seems to have set out to prove her critics wrong. Indeed, on Jutta Hipp with Zoot Sims (Blue Note, 1956) she stays away from the influence of Tristano and Silver, and her sound is full of swing on uptempo numbers ("Wee Dot," "Almost Like Being in Love," "Too Close for Comfort") and of restrained melancholy on the only ballad of the session ("Violets for Your Furs"). The group is rounded out by Jerry Lloyd on trumpet, Ahmed Abdul-Malik on bass, and Ed Thigpen on drums, and this quintet setting is perfect to showcase Hipp's delicate playing. Lloyd provides an original composition ("Down Home") and Sims another one ("Just Blues"), and even though Sims's tenor saxophone is accorded more space than Hipp's piano, it is Hipp that creates the wistful, easy-going atmosphere that makes this album a winner. The 2008 CD reissue adds two tracks from the session that never made it onto the original LP ("These Foolish Things" and "'S Wonderful"), thus offering everything that Hipp and Sims recorded together. Hipp, who was also a talented painter, would inexplicably retire from the New York jazz scene shortly after leading this session, and this very recommendable quintet album is definitely the highlight of her meager, though very interesting, discography.

Posted by Anton and Erin Garcia-Fernandez at 12:15 PM 2 comments: