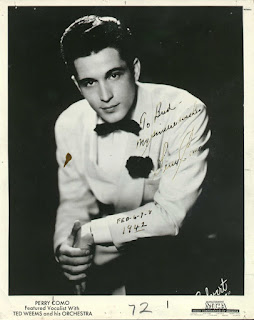 In his heyday of the 1940s and '50s, particularly after he became a mainstay on the new medium of television, Perry Como became known for his relaxed, soothing approach to the vocal art. No wonder that one of his LPs was titled So Smooth, since Como was simply one of the smoothest singer who ever stood before a microphone. He was one of many Italian-Americans who found fame and fortune thanks to their crooning abilities, others being Russ Columbo, Frank Sinatra, Dean Martin, and Vic Damone, to cite just a few. Yet Como's style has a great deal more in common with Bing Crosby than it does with Sinatra, and in fact, his recording career began three years after that of Young Blue Eyes. In 1936, Como, who had been born in Canonsburg, Pennsylvania, in 1912, had been singing for a while with an orchestra led by local musician Freddie Carlone, although he never made any records with that outfit. Therefore, when Ted Weems came calling, it only made sense that Como would accept a featured vocalist spot with the more popular band.

Weems, also a Pennsylvanian, had been fronting a band professionally for over a decade and was based in Chicago. Moreover, he was looking for a "boy singer," as male vocalists were often called in those days. Como was the perfect fit, especially for singing the slower, more romantic ballads, and so he was featured with the orchestra both on radio and on records. The Weems band had a Decca recording contract, and in a span of five years, Como cut two dozen sides, none of which charted, though "I Wonder Who's Kissing Her Now" would become a million seller when it was reissued in 1947, by which time Como was already an established star. Back in 1999, Jasmine Records, of England, collected Como's recordings with Weems on a CD appropriately titled Class Will Tell. And class is definitely something that the Weems band had plenty of, no doubt. In the liner notes, Michael Dunnington echoes Mr. C's complaints that "the good songs went to the other members of the band, and he got the ones that nobody else wanted." However, even the most cursory listen to this CD reveals that this is not always so. Though not all the songs are winners—what big band vocalist of the era can claim such a thing anyway?—there are some lovely songs here, including "Lazy Weather," "Class Will Tell," "You Can't Pull the Wool over My Eyes," and "In My Little Red Book," this last one also recorded by Guy Lombardo and country singer T. Texas Tyler. 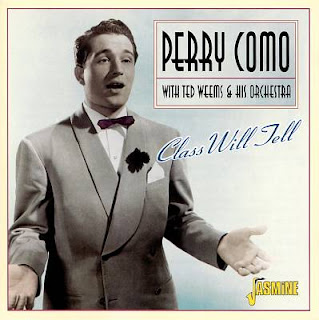 The Weems orchestra was a tightly-knit dance band that sounds professional and at times quite exciting, particularly on ensemble passages, since the arrangements do not seem to leave too much room for solos. Vocally, Como shows a noticeable debt to Bing Crosby, especially to the sound we hear on Der Bingle's records of the 1920s and early '30s, when Bing was singing in a higher register and had not yet totally refined his smooth baritone as he would from the '40s on. Como sounds a great deal like Crosby here—which apparently prompted Dave Kapp at Decca to wonder why the label needed another Bing—but as times goes on, he gradually starts to find his own style, as we can hear on "That Old Gang of Mine," "It All Comes Back to Me Now," and "Angeline." Yet even then his style is still heavily influenced by Crosby, something that can also be said of several other singers of his generation, such as Buddy Clark or Dick Haymes. After leaving Weems, Como would go on to bigger and better things, including smash hits like "Till the End of Time" and "Prisoner of Love," to name just two from 1945-46. But the recordings on this Jasmine release are very enjoyable and interesting because they illustrate the formative years of a great crooner.

Posted by Anton and Erin Garcia-Fernandez at 9:16 AM 1 comment:

This Love of Mine: Jack Jones's Tribute to Songwriting Singers 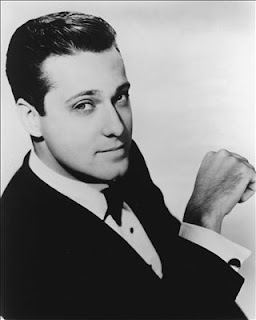 Despite the fact that he has enjoyed a long and productive career, Jack Jones is one of the 1960s crooners about whom we do not seem to hear too much these days. In his heyday, Jones scored big hits such as "Lollipops and Roses," "Wives and Lovers," and "My Best Girl," and many of his albums—especially the ones he cut during the sixties—are fantastic and, to my mind, constitute great examples of classic pop singing at its very best. In the 1970s, though, some of his records became rather erratic, as he attempted to sing contemporary songs that were ill-suited for his voice and style. Had he concentrated on singing standards with jazz-inflected backing, the way that, say, Rosemary Clooney did for Concord in the seventies and eighties, his output would have been perhaps more satisfying. Yet it is easy—and clearly unfair—to make this kind of judgment with the benefit of hindsight. As it stands, Jones's recorded legacy, its ups and downs notwithstanding, is impressive and includes some very enjoyable titles. 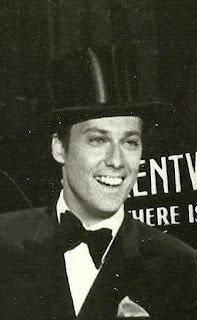 Noted jazz critic Will Friedwald has always had a soft spot for Jones's singing. In his excellent Biographical Guide to the Great Jazz and Pop Singers, he gives the vocalist a great deal of credit for the many LPs he cut for Kapp Records in the sixties, stating that "he was precisely right for that decade—and all of those that have come since—and the classic albums he made back then will probably be prized and listened to longer than nearly all of the so-called in-the-moment pop acts of the time" (255). In the face of titles such as Call Me Irresponsible, Where Love Has Gone, and There's Love & There's Love & There's Love (a superb collaboration with arranger Nelson Riddle), among several others, it is hard to disagree with Friedwald. But the album that usually slips through the cracks whenever Jones's career is discussed is a pre-Kapp effort that he made in 1959 for Capitol entitled This Love of Mine.

The son of actor and singer Allan Jones and actress Irene Hervey, Jack Jones had been born in Los Angeles in 1938 and had enjoyed the benefits of belonging to a showbiz family. He had always been fascinated with pop music, particularly with singers like Frank Sinatra and Mel Tormé, and by the 1950s he was appearing in nightclubs with his father, which led to a promising recording contract with Capitol. But the company, showing really poor judgment, had him record a slew of teenage pop singles that went nowhere mostly because Jones's heart was not in that kind of music. What he wanted to record was adult pop, the type of material that had made Bobby Darin a household name. Unfortunately, Jones only got one opportunity to do this at Capitol, when he recorded the Voyle Gilmore-produced This Love of Mine. This was an unusual concept album in that the underlying theme that held the eleven songs together was that they were tunes penned by songwriters who were better known as singers, or whom the public in general did not associate with the songwriting craft. 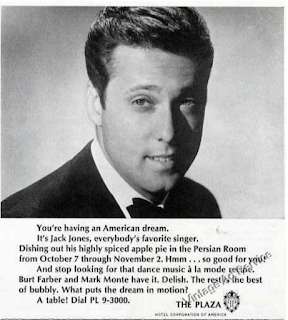 One might think that such a concept would make for a weak album, but it is not the case, as the repertoire is very well chosen. There are two songs co-written by Sinatra, the title track and "I'm a Fool to Want You." The former dates back to Sinatra's tenure with Tommy Dorsey, while the latter is supposed to chronicle the difficulties that he underwent during his tempestuous relationship with Ava Gardner. Jones decides to take both at a noticeably faster tempo than Sinatra, which is most surprising in the case of "I'm a Fool to Want You" given the highly dramatic nature of its theme. On "This Love of Mine" there is an unexpected guitar solo that fits the mood of the tune nicely. From the songbook of comedian Steve Allen come "Impossible," an agreeable ballad, and the classic "This Could Be the Start of Something Big," which shows Jones's confident approach whenever he is called upon to swing. The album also includes two songs by Nat King Cole ("With You on My Mind" and "To Whom It May Concern," both originally recorded by Cole for Capitol) and two by the outstanding pianist-singer-songwriter Matt Dennis—the lesser-known "Show Me the Way to Get Out of This World," sung in a laid-back swinging style and featuring an interesting trumpet solo, and "Angel Eyes," the famous saloon song that Sinatra had just included in his album Only the Lonely and undoubtedly one of the highlights of Jones's debut LP.

Jones approaches the witty "I Don't Know Enough About You," penned by Peggy Lee and her then-husband Dave Barbour, with gusto, in an easy-swinging sort of way, and perhaps to show that he can also join the ranks of those singers who also dabble in songwriting, he offers a composition of his own, "What Would I Do," which actually turns out to be quite a respectable effort. The album closes appropriately with the beautiful Frankie Laine ballad "We'll Be Together Again," another one that Sinatra also recorded for Capitol (on Songs for Swingin' Lovers). Released toward the end of 1959, This Love of Mine earned a rather positive review from Billboard (November 30, 1959):

After a few efforts, this is the initial LP by a lad whose work augurs a strong potential. Jack Jones is the son of former stars Allan Jones and Irene Hervey, and he has been playing nitery dates with his dad in Las Vegas and Los Angeles. He shows a feeling for a swinging rhythm, an ability to project his personality and a pleasing way of styling a ballad. Strong backing by Bobby Hammack's ork. 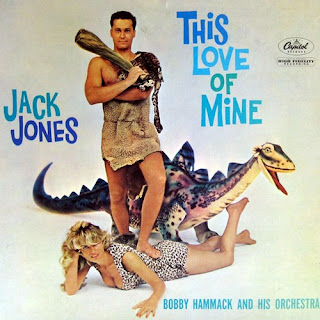 The reviewer is certainly right about Jones's way with both swingers and ballads, as well as about the assessment of Bobby Hammack's arrangements, which are strong without ever getting in the way and feature some interesting touches such as the brief organ solos on "Angel Eyes" and "We'll Be Together Again." The cover is a different matter altogether—it is anyone's guess why the powers that be at Capitol thought that it was appropriate to have Jones photographed in full caveman attire, wielding a big club, and stepping on a scantily clad woman lying in the foreground, while some kind of dinosaur observes the scene in the background. Looking at it almost sixty years later, one wonders how the cover can be in any way related to the theme of the album, what kind of audience the producers were trying to target, and simply what was going through the heads of whoever decided to approve such a horrifying cover. It is, indeed, one of the strangest, most mystifying pieces of LP artwork I have ever seen. Whatever the case, in spite of the favorable review from Billboard, the album was not much of a hit, and it was not until he signed with Kapp two years later that Jones's career would actually take off. Yet This Love of Mine—which may be easily found on CD these days as part of the European reissue Jack Jones: Six Classic Albums, from Real Gone Music—remains one of my favorite albums by Jones and a very enjoyable early effort that in many ways already indicates greater things to come. 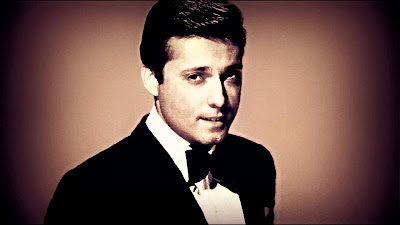 Posted by Anton and Erin Garcia-Fernandez at 8:36 AM No comments: