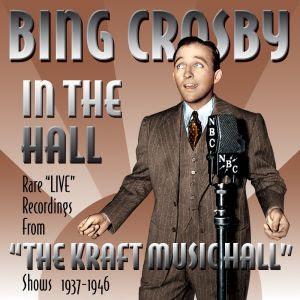 In this new installment of the Vintage Record Review Desk, I discuss some CDs that I have either recently purchased or rediscovered on my shelf. They include Bing Crosby's latest collection of cuts from the Kraft Music Hall, the late-fifties sessions featuring Tony Bennett and Count Basie, the 1956 album that pairs up Rosemary Clooney and Duke Ellington, and a 1970 gathering of Paul Gonsalves and Ray Nance. I also make a special mention of a forthcoming biography of Rosemary Clooney that will be on the market later this summer.

I have already written a fairly extensive review of Bing Crosby in the Hall (Sepia, 2013) on the Amazon.com website, which you may access here, so I will not add a great deal to what I already stated there. This is a fantastic collection of thirty rare performances taken from Bing Crosby's ten-year run as host of the extremely popular Kraft Music Hall radio show. On that show, Bing offered a concoction of music and comic banter full of ad-libbing that was then revolutionary and that turned him into one of the most popular radio personalities of the 1930s and '40s. For different reasons, Crosby never made commercial recordings of some of the songs that he sang on the show, and that is one of the reasons why this compilation is so interesting: we get to hear Bing doing wonderful renditions of classics such as Hoagy Carmichael's "I Get Along Without You Very Well," Johnny Mercer's "I Thought About You," and Cole Porter's "You'd Be So Nice to Come Home to," among many others. John Scott Trotter provides his usually attractive arrangements ably played by a studio orchestra, and Bing is at the peak of his game, in fine vocal form, and as relaxed as he always was when he sang over the airwaves. Sepia Records have done an outstanding job remastering these tracks from old acetates once stored in Trotter's basement and transferred to tape sometime in the 1960s, and so the sound quality is really satisfying bearing in mind the age of the recordings. This release has been prepared with the help of the International Club Crosby, and the very informative liner notes, which include a brief discussion of each track, were written by Malcolm Macfarlane, the editor of the ICC's Bing magazine. This is certainly a must for Crosby fans, and I do hope that Sepia see it fit to turn this release into a full-blown series, since there is enough interesting material in the vaults to do so. 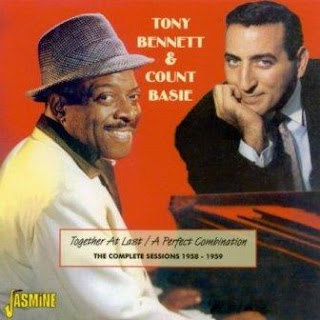 Like Crosby on the Kraft Music Hall show, Tony Bennett was also at the peak of his youthful vocal powers on two sessions that he cut in 1958 and 1959 for Roulette and Columbia with the Count Basie orchestra. At the time, both Bennett and Basie were appearing at Philadelphia's Latin Casino but were under contract to different record companies, so it was decided that they would cut two separate studio albums, one for each label. Both sessions have been reissued on Together at Last, A Perfect Combination (Jasmine, 2008), which features every side known to exist. Though he was never a band singer, Bennett has always had a wonderful sense of swing, and he sounds very much at ease backed by one of the most swinging bands of all time, which at that point included jazz greats such as Thad Jones and Joe Newman (trumpet), Al Grey and Benny Powell (trombone), Freddie Green (guitar), and Sonny Payne (drums), among others. The arrangements are perfect for Bennett's voice, never obtrusive on ballads and full of rhythmic inventiveness on rhythm numbers, and the material chosen is mostly a fine selection of standards from the pens of Vincent Youmans, the Gershwins, Cole Porter, Harry Warren & Al Dubin, Howard Dietz & Arthur Schwartz, Johnny Mercer et al. George Hulme's liner notes, as it is often the case with Jasmine's releases, are a little too brief, but at least they do contain a discography of the sessions. Jasmine has had the good sense to dispense with the fake applause and audience reaction that were overdubbed onto the original LP release, making this the definitive edition of these very enjoyable sessions. 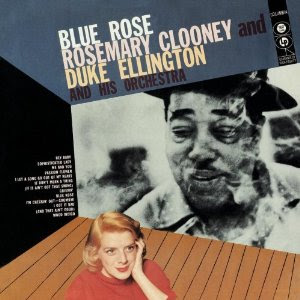 In 1956, about two years before the Bennett-Basie summit, the studios of Columbia Records witnessed yet another magnificent collaboration, that of Rosemary Clooney and the Duke Ellington orchestra. Though this association, which produced the excellent album Blue Rose (Columbia-Legacy, 1999), might have seemed rather unlikely at first sight, the results certainly proved otherwise, as Clooney proved to be not only a fine pop singer, but also a jazz vocalist of the first order. This is also evident in the recordings she made with Benny Goodman and with Harry James, and particularly, in her outstanding series of songbook albums cut in the 1970s and '80s in a small-group jazz setting, but to my ears, her LP with Ellington represents her best work as a jazz singer. As always, Duke and Billy Strayhorn provide perfect musical settings for Clooney's voice: the arrangements are imaginative and often intricate without ever getting in the way of her lightly swinging, highly attractive voice. Rosie tackles Ellington classics such as "Sophisticated Lady," "I Let a Song Go out of My Heart," "It Don't Mean a Thing (If It Ain't Got That Swing)," "Mood Indigo," and "I Got It Bad (and That Ain't Good)" with ease, and all tracks are embellished by first-rate solos from Ellington's sidemen, including names such as Ray Nance and Clark Terry (trumpet), Johnny Hodges, Russell Procope, Harry Carney, and Paul Gonsalves (saxophone), and others. The indispensable Columbia-Legacy reissue includes an interesting essay by Will Friedwald, as well as two bonus tracks from the sessions ("If You Were in My Place" and "Just A-Sittin' and A-Rockin'") that were not included in the original album. By the way, a new biography of Rosemary Clooney, entitled Late Life Jazz: The Life and Career of Rosemary Clooney (Oxford UP), is scheduled for publication later this summer. It is co-authored by Ken Crossland and Malcolm Macfarlane (the latter wrote the liner notes of the Bing Crosby release reviewed above), and we look forward to reading it as soon as it is available. 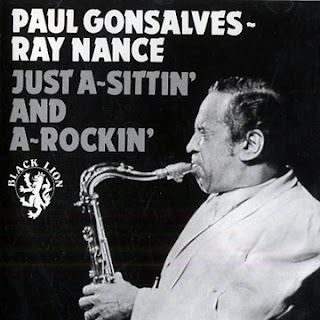 And finally, a CD that I recently purchased as a gift for my in-laws, Scott and Susan Spinka, of Pittsboro, NC. Two of the musicians that were a part of the Ellington band during the Blue Rose sessions, Paul Gonsalves and Ray Nance, came together in August and September of 1970 in New York for the two sessions that make up the album Just A-Sittin' and A-Rockin' (Black Lion, 1990). On the first of those sessions, they are joined by Raymond Fol (piano), Al Hall (bass), and Oliver Jackson (drums) and go through a very appealing selection of tunes, mostly by the Duke and Billy Strayhorn. Nance alternates between trumpet and violin and even offers a sample of his tuneful, gravelly singing on the title track of the album and on the light-hearted "I'm in the Market for You." Gonsalves plays some very lyrical, breathy tenor saxophone definitely influenced by another of the Duke's great reedmen, Ben Webster. For the second session, the group is augmented by Norris Turney (alto saxophone and flute), and the great Hank Jones replaces Fol on the piano stool. That second meeting spawned "B.P. Blues," a lovely Ellington-penned blues tune that kicks off the album, but for the most part, the numbers chosen, such as "Don't Blame Me" and a very beautiful reading of Matt Dennis's "Angel Eyes," are standards not written by Ellington or Strayhorn. The CD reissue, which reprints the original liner notes by producer Alan Bates, is rounded up by two selections ("I Cover the Waterfront" and "Stompy Jones") not included in the original LP. Although this marvelous session is currently out of print on CD, it is certainly well worth picking up a second-hand copy—that is, if one can still be found at a reasonable price!
Posted by Anton and Erin Garcia-Fernandez at 2:11 PM No comments: