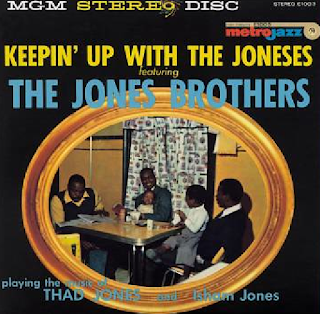 In 1958, Leonard Feather produced a session for MGM that was subsequently released under the title of Keepin' Up with the Joneses, by a band that called itself The Jones Brothers. And who were these Jones Brothers? Although the cover of the LP does not offer much information, the three brothers were trumpeter Thad Jones, pianist Hank Jones, and drummer Elvin Jones, augmented by Eddie Jones on bass, who was not actually part of the Jones family. Though the three Jones siblings went on to have long-lasting careers in jazz, this album remains one of their most obscure, and at the time of this writing, its availability on CD is rather limited. It is, however, a unique and very interesting record that needs to be rediscovered, particularly since the three Jones brothers did not record together very often thereafter.

The fact that the cover does not list the names of the participants, simply making reference to their family ties, is a gimmick that must surely be attributed to Feather. The choice of material also seems to be mandated by yet another gimmick: as the cover reads, the band is "playing the music of Thad Jones and Isham Jones." While it does make sense that the album would include compositions by Thad Jones, who plays flugelhorn on the date, the three tunes by Isham Jones, a prolific songwriting bandleader of the 1920s and '30s, were most likely chosen due to Isham's last name. However, like Eddie Jones, Isham was not actually related to the three Jones brothers. In any case, one cannot argue with the selections by Isham Jones, all of them dependable standards written in partnership with either Gus Kahn or Marty Symes and included on the second side of the LP. "It Had to Be You" is actually one of the highlights, introduced by Thad on flugelhorn and featuring an outstanding lengthy piano solo by Hank, who lends support to Thad's horn playing throughout the whole performance. "On the Alamo" is taken at an agreeable, easy-swinging tempo and is clearly dominated by Hank's lyrical piano, whose magnificent solo lasts for about half the track before Thad even gets a chance to play his muted flugelhorn part. Another one of the most memorable moments on the album is the closer, "There Is No Greater Love," which becomes the perfect vehicle for an intimate dialogue between Thad and Hank.

The rest of the selections are all Thad Jones originals, and accordingly, it is Thad's flugelhorn that is most often spotlighted, as in the case of the opener, "Nice and Nasty," built on a blues-tinged theme that lends itself easily to improvisation and even leaves some room for Eddie Jones to take a brief bass solo. The title track, "Keepin' Up with the Joneses," is based on a very catchy riff that is introduced by the trumpet and repeated by the piano; both Thad and Hank have ample room to shine here, and Hank shows his versatility by switching to organ halfway through the track. "Three and One" is another lovely mid-tempo melody by Thad whose title most likely makes reference to the fact that the session is a collaboration by three brothers and a fourth musician who is not actually a blood relative. Thad's flugelhorn sounds particularly low and understated on "Sput 'n' Jeff," which contrasts with Hank's quick, rippling piano runs. The brief dialogues between Elvin's unusually soft drumming and Eddie's rather quiet bass add freshness and interest to the track. All in all, this is a very appealing session that makes us wish that the three Jones brothers had made many more records together. It was reissued on CD back in 1999 and is still available here, but it is most definitely in need of a serious, updated reissue so that it may reach a wider audience than it has so far.

Posted by Anton and Erin Garcia-Fernandez at 1:29 PM