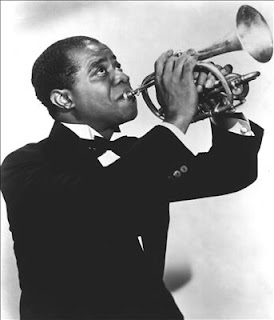 By the time Louis Armstrong and the Mills Brothers first entered a studio to record a few sides together in 1937, they were both successful and popular artists in the jazz and pop fields, the brothers perhaps slightly more so than Satchmo. They had recorded with the likes of the Boswell Sisters and Bing Crosby, and the time seemed right to pair them with Armstrong, who at the time was being pushed by producer Jack Kapp to diversify his material and record in different settings, in an attempt to appeal to both black and white audiences and to score pop hits. Though Armstrong's gravelly voice seemingly stood in stark contrast with the smooth harmonies of the brothers, it actually blended extremely well on the finished recordings, most likely because both Armstrong and the Mills Brothers came out of the same musical tradition and understood each other's language perfectly well. While the Millses had become famous for their ability to mimic the sound of instruments (the guitar was the only instrument that they actually played) this was more than just a gimmick, and in fact, Satchmo's trumpet, which had exerted its influence on the music of the quartet, is superbly supported by the brothers' mimicry.


All in all, Armstrong and the brothers recorded eleven songs together over a three-year period that goes from April 1937 to April 1940. The material chosen for these sessions is rather eclectic, from novelty numbers like "Boog It," "The Flat Foot Floogie," and Irving Berlin's "My Walking Stick" to updates of minstrel material like "In the Shade of the Old Apple Tree" to pop songs of the day such as "Marie" and "The Song Is Ended," both of them written by Berlin as well. The atmosphere of all the sessions—there were six in all—is extremely relaxed, with the brothers harmonizing and Armstrong offering hip vocals and some excellent trumpet solos to complement the Millses' signature sound effects. Most of the songs feature brief guitar introductions, and as in the case of Don Redman's "Cherry," one of the standouts from these sessions, the interactions between Armstrong and the brothers are seamless. All the songs are tightly arranged and clearly intended as both jazz and pop records that could be appealing to different audiences. 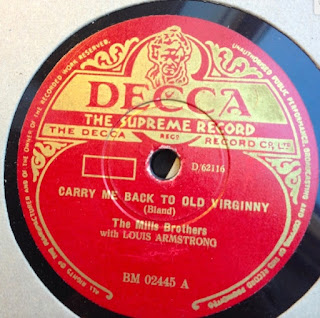 At least one of the singles that came out of these dates was extremely popular—the one that paired "Carry Me Back to Old Virginny" and "Darling Nellie Gray," which ended a brief hit drought for the Millses. By the late 1930s it had become common practice in the recording industry to use nineteenth-century songs, mostly because they had fallen into the public domain, but this particular disc is unique in that Amstrong and the brothers not only swing and modernize these two songs about slavery and the old plantation but they also turn them into subtle calls for freedom. As Gary Giddins has written in Visions of Jazz, this record is "a politically astute response to the pastoralism that became rife in the recording industry of the '30s and continued into the early '60s" (24). In the hands of Armstrong and the brothers, "Old Virginny" no longer expresses a yearning to go back to working "day after day in the fields of yellow corn" but becomes a shout for political and social freedom, which is underscored by the choice of the abolitionist song, "Darling Nellie Gray," for the flip side. It seems appropriate to quote Giddins more at length on this subject:

Perhaps Armstrong's most able signifying comes at the end of the first eight bars of his thirty-two-bar solo, an unmistakable trumpet call—to freedom in life. If the flip side had been a similar piece or an ordinary ballad, the record would—despite Armstrong's saves—have limited meaning. But "Darling Nellie Gray" was one of the most powerful abolitionist songs of the 1850s; published only four years after Uncle Tom's Cabin, it is widely credited with changing people's minds on both sides of the Mason-Dixon Line. (26)


The choice of material, then, could not have been accidental, particularly if we bear in mind that a similar change of meaning also operates on their version of Stephen Foster's "The Old Folks at Home," which, in the rendition by Armstrong and the Millses, is as far away from a song of longing for the old plantation as "Old Virginny." As Giddins has also rightly pointed out, Armstrong mocks the original meaning of this Foster ballad, taking it at a rather brisk pace and eschewing any kind of nostalgia for an idealized past on the plantation: when he ends his rendition by saying "we are far away from home," there is no trace of sentimentality in his voice. This is a record that shuns a painful past and prefers to look toward a brighter future ahead. Shortly after these sessions, the Mills Brothers would score a smash hit with "Paper Doll," and Louis Armstrong would go on to become one of the major icons of the twentieth century. Sadly, these recordings have long been neglected both by a vast majority of critics and by the record label that originally released them. As a matter of fact, CD reissues of these songs are scarce: European imports such as Jazz Archives # 47: Louis Armstrong and The Mills Brothers Greatest Hits and The Mills Brothers Featuring Louis Armstrong Vol. 4: 1937-1940 are, to our knowledge, the only reissues currently available, and they are not always easy to find. Yet the uniqueness, historical significance, and artistic value of the collaboration between Satchmo and the Millses calls for a serious reissue and a subsequent critical reappraisal. 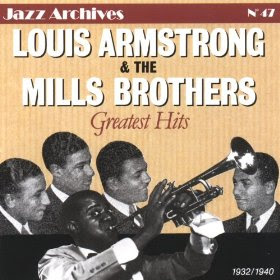 Posted by Anton and Erin Garcia-Fernandez at 10:49 AM