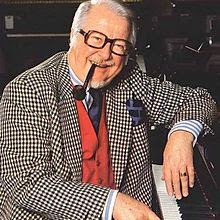 A recent post about Blossom Dearie in Marc Myers's JazzWax blog made me dig deep into my jazz collection and dust off the only CD I have by French jazz pianist Jack Diéval, who appears in this video improvising with Dearie on a blues theme. Anyone who is impressed with Diéval's piano skills in the video is encouraged to look for Diéval's Jazz in Paris: Jazz aux Champs Élysées.

Though not very well remembered these days, Jack Diéval was one of the leading figures in French jazz between the 1940s and the 1960s, not just as a pianist but also as a radio and television host. Known for his elegant piano style and for his uncanny ability to accompany just about anyone, Diéval was nicknamed "the Debussy of jazz" and throughout his career, he worked wholeheartedly to promote jazz in France in any way imaginable. Born in Douai in 1920, the young Diéval studied piano and soon became fascinated with jazz, making a name for himself at first primarily as an accompanist, working with tenor saxophonist Alix Combelle and with the vocalist Henri Salvador. In 1947 Diéval was named the best pianist in the country by the prestigious French magazine Jazz-Hot, and then his career really took off: he began to record steadily and even collaborated on some songs with the poet Boris Vian. One of the tunes they wrote together, "C'est Le Be Bop," would in time be successfully recorded by Salvador. 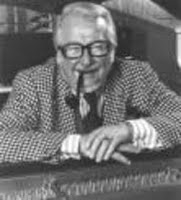 In 1954 he began hosting the pioneering jazz radio show Jazz aux Champs Élysées, which would remain on the air under his supervision until 1972. The roster of great jazz musicians who appeared on the show is staggering and includes, among many others, Eric Dolphy, who made his final radio appearance with Diéval, and Jean-Luc Ponty, who played over the airwaves for the first time on that show, well before he was recognized as one of the best things that happened to modern jazz violin. Around this same time Diéval was also hosting television shows regularly featuring live jazz, and although after the advent of rock'n'roll he briefly tried his hand at the new style, jazz always remained his first love, and his few rocking records are decidedly jazzy. Through the years he would make a respectable number of records for different labels, most of which are unfortunately unavailable on CD. 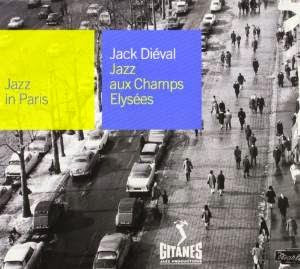 The one compact disc featuring Diéval's music that is currently available in the U.S. is a highly recommendable one, though. Jazz in Paris: Jazz aux Champs Élysées (Gitanes / Universal Music, 2002) includes a session recorded on June 24, 1957, at the Théâtre Pigalle in Paris, that finds Diéval on piano in the company of the J.A.C.E. (Jazz aux Champs Élysées) All Stars. This group was the house band for Diéval's radio show (hence its name) and was indeed an all-star combo of French jazz luminaries—Guy Lafitte on tenor sax, Michel de Villers on baritone sax, Sacha Distel on guitar, Paul Rovère on bass, and Christian Garros on drums. The session was designed to sound like one of Diéval's radio programs and was originally released on a Polydor LP. It is presented here in its entirety, complete with the introductions of the musicians who participate. Except for a couple of originals (Diéval's "Rif Hi-Fi" and "Blues for Polydor" and Lafitte's "Do Not Disturb") the repertoire relies on standards by Duke Ellington, Count Basie, Hoagy Carmichael, and the Gershwins.

On their version of "Solitude," Lafitte and de Villers interact beautifully and prove how adept they are at playing ballads. The introduction to "The Man I Love" shows why Diéval was often compared to Debussy, and Distel, who would become better known as a pop singer but is an excellent jazz guitarist, shines on "In a Mellow Tone" and particularly on "The Nearness of You," where he does a fine job in support of Lafitte's statement of the haunting Carmichael melody. The CD also includes four tracks from a trio date recorded over a year before, on March 26, 1956, in Paris. The identity of the rhythm section is unknown, and Diéval enjoys ample room to showcase his elegant and effective piano style on the mid-tempo "Learnin' the Blues," the ballad "Tenderly," and two lesser-known compositions with French titles, "Pour Penser à Toi" and "Donne Ta Main et Viens." The four songs were released on a Polydor EP, and Boris Vian's review of that record in Jazz-Hot appropriately lauded "the prettiness of [Diéval's] touch, the simplicity and logic of his phrasing, and the facility with which he improvises." This CD from the Jazz in Paris series is the perfect—and for now the only—place to start enjoying Diéval's piano playing, and it proves that he deserves to be more than just a footnote in the history of European jazz.

Posted by Anton and Erin Garcia-Fernandez at 9:35 AM