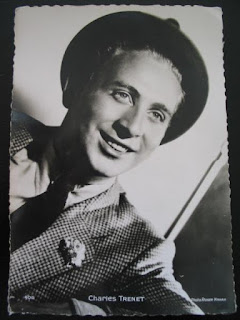 A few days ago I was talking to my father about the great French singer-songwriter, Georges Brassens, whom we both admire, and that conversation brought to mind the undeniable influence of Charles Trenet on the songwriting style of Brassens. Therefore, I decided to dust off my Trenet records, which in turn led to writing this brief overview of his amazing career.

Few French singers enjoyed a career as long and productive as Charles Trenet, who, in a span of about sixty years, wrote and recorded countless songs, toured tirelessly, and even published several novels and books of poetry. Some of the best songs he introduced achieved international popularity through English versions performed by the likes of Bobby Darin and Frank Sinatra. That is the case of "La Mer," which became a big hit for Darin as "Beyond the Sea," and the beautiful ballad "Que Reste-t-Il de Nos Amours?" which was covered in English by many artists under the title of "I Wish You Love." Trenet's ebullient stage persona, his theatrics, and his jazz-tinged singing style influenced a whole generation of French singers, including Jean Sablon, Yves Montand, Georges Brassens, Léo Ferré, and Jacques Brel, so his importance in the universe of the French chanson should not be underestimated.

Born in Narbonne in May 1913, as a young man Trenet was inspired by the music and stage demeanor of Maurice Chevalier, one of the most popular French all-around entertainers of all time. Due to the divorce of his parents, his childhood was not the happiest, and not being a very good student, Trenet found solace in art, particularly in painting and music. By the 1930s he was working as part of a duo with panist Johnny Hess, and the Chevalier influence was already clearly showing, not only in his explosive singing style, but also in his penchant for launching into actual impersonations of Chevalier himself. The influence of jazz is also evident in the early recordings that the duo of Charles and Johnny made in the mid-30s and that include mostly songs that they wrote themselves, together with French versions of American tunes by Cole Porter. Despite their popularity in Paris music halls, Charles and Johnny broke up their act in 1936 because of mandatory military service, and it was around this time that Trenet's solo career began in earnest, both as a songwriter and as a vocalist. In the former capacity, he penned songs for Jean Sablon ("Vous Qui Passez Sans Me Voir"), his idol Chevalier ("Y'a de la Joie") and Yves Montand ("C'est la Vie Qui Va"), and his first hit as a singer was the catchy tune, "Boum," which he cut in 1939, and whose lyric mentions the Bing Crosby tune, "Love in Bloom." 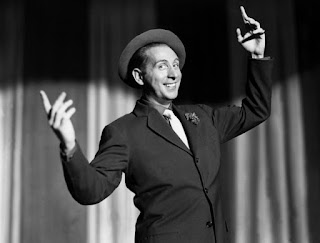 Trenet's bombastic stage persona earned him the nickname of "Le Fou Chantant," or "The Singing Madman," but he was as adept at doing jazzy uptempo numbers as he was at singing more serious sentimental ballads like "Ménilmontant," "Retour à Paris," "Douce France," and "Que Reste-t-Il de Nos Amours." Sometimes he even sang texts by famous poets set to music, as in the case of the lovely "Verlaine," which he recorded with Alix Combelle's Jazz de Paris combo in 1941. This recording brought about criticism from collaborationist journalists who believed that jazz (a style of music which, we must not forget, was labeled "undesirable music" by the Nazis) should not be mixed with the work of a serious poet like Paul Verlaine, whose "Chanson d'Automne" is the basis for this song. Trenet's star rose particularly after the war, and by the 1950s he was an internationally known artist who was touring widely and whose songs were recorded by singers in several languages other than French, and in 1951 he even appeared on television in the United States for the first time. Throughout his career, he got to visit the U.S. and Canada several times, and in fact, his popularity in Canada was one of the main reasons that persuaded him not to retire from recording and performing live in the 1970s. 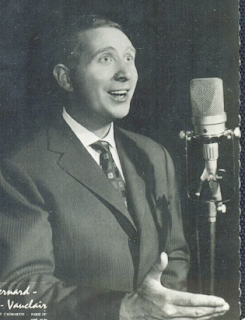 The arrival of rock'n'roll and changing musical tastes in the 1960s inevitably hurt Trenet's career; as a result, he made very few personal appearances  and released hardly any albums at all in that decade. He kept writing songs and fiction, though, and by the late '70s and early '80s, renewed interest in the music of his era brought him back to French and Canadian stages. Some of these live appearances were recorded, and by the 1990s, Trenet was still making new albums (1995's Fais Ta Vie, with several new songs, is a good example) and different record labels were reissuing his old recordings on CD. Charles Trenet passed away in Créteil in February 2001, about two years after cutting a live album at the Salle Pleyel in Paris. He was one of several singers who contributed to bringing jazz into the French chanson, thereby enriching it and making it more complex and more engaging. He will always be remembered for his dapper stage persona and for the many wonderful songs that he wrote and that could be at the same time joyful, nostalgic, and downright funny. 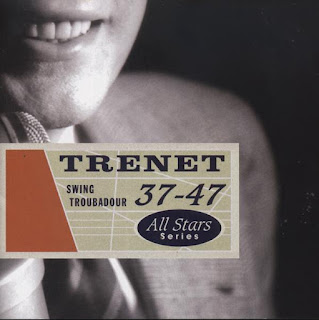 For those who may wish to get acquainted with his vast recorded legacy, there are many compilations currently available in the U.S., but a proper place to start is Swing Troubadour 1937-1947 (Saga Records, 2008) because it features most of his best-known numbers, including "Boum," "La Mer," "Je Chante," "Verlaine," "Ménilmontant," and "Que Reste-t-Il de Nos Amours," among several others. The musicianship of the backing bands is outstanding here, as Trénet joins forces with Alix Combelle, Wal-Berg, Bernard Hilda, and even dazzling swing guitarist Django Reinhardt on "La Cigale et La Fourmi." A more comprehensive collection is the two-CD import Chanson 1937-1960 (BD Music, 2011), which contains 48 tracks, very detailed liner notes in French, and even an account of parts of Trenet's life in the form of a full-color comic book. Another interesting French import is 100 Chansons (EMI France, 2007), a five-disc set that offers, well, one hundred tracks by Trenet, and finally, Definitive Collection (Not Now Records, 2010) is a fairly inexpensive way to get introduced to seventy-five of his best songs, with good sound quality but, alas, no notes or personnel information.

Posted by Anton and Erin Garcia-Fernandez at 9:40 AM